Civil War Stories: 40 of the Greatest Tales about the War Between the States (Paperback) 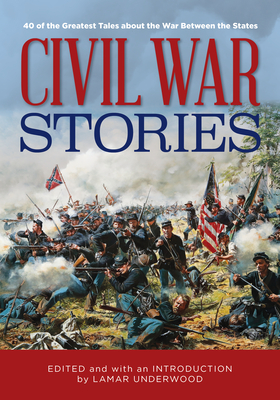 Civil War Stories: 40 of the Greatest Tales about the War Between the States (Paperback)


On Our Shelves Now
The Civil War Re-Lived in 40 Stories Between the first shots fired at Fort Sumter on April 12, 1861, to Lee's surrender at Appomattox Courthouse on April 9, 1865, the nation was irrevocably changed, as were the lives of the soldiers and civilians who lived through the war. This is an extraordinary collection of stories about that epochal conflict, bringing the victories and defeats, the valor and the heartbreak, alive with personal intensity. Includes entries by: Ambrose Bierce Stephan Crane Mark Twain Abraham Lincoln Ulysses S. Grant Walt Whitman Frederick L. Hitchcock Louisa May Alcott Carlton McCarthy Abner Doubleday Theodore Roosevelt and many others.
Lamar Underwood is the former editor-in-chief of Sports Afield and Outdoor Life and former editorial director of the Outdoor Magazine Group of Harris Publications in New York. The numerous books he has edited include Tales of the Mountain Men, The Greatest Hunting Stories Ever Told, Survival Stories, and War Stories. His novel On Dangerous Ground, was published by Doubleday. He lives in Pennington, . New Jersey