Our Crowd: The Great Jewish Families of New York (Paperback) 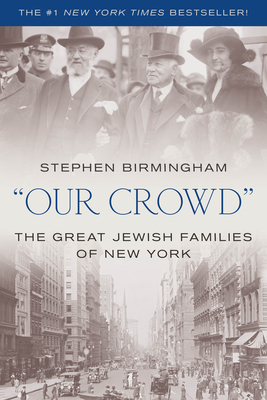 Our Crowd: The Great Jewish Families of New York (Paperback)


Available to Order - Usually Arrives in Our Store in 4 to 7 Days
"A fascinating and absorbing chapter of New York social and financial history--it is hard to understand why it has never been written before." --Louis Auchincloss "When it comes to the folkways of the rich, the powerful, and the privileged, Stephen Birmingham knows what he's talking about." --Los Angeles Times "Future American histories will have to take into account Mr. Birmingham's financial and social history and imposing cast of characters." --The New York Times Book Review Among the Jewish families who emigrated from Germany to New York in the nineteenth century were the Loebs, the Goldmans, the Sachs, the Seligmans, and the Guggenheims, to name only a few. In New York, they quickly made their way from the Lower East Side to the Upper East Side, building vast fortunes by dint of hard work and moving from the tenements where they initially lived to exquisite mansions on Park Avenue and Fifth Avenue. Yet, despite their acquired wealth, they were denied entry into the upper reaches of New York society--the so-called 400--because of their religion, modest origins, and recent arrival in America. "Our Crowd" tells the engrossing story of the extraordinary society they built in New York.
Stephen Birmingham (1929-2015) was an American author of more than thirty books. Born in Hartford, Connecticut, he graduated from Williams College in 1953 and taught writing at the University of Cincinnati. Birmingham's work focuses on the upper class in America. He's written about the African American elite in Certain People and prominent Jewish society in Our Crowd: The Great Jewish Families of New York, The Grandees: The Story of America's Sephardic Elite, and The Rest of Us: The Rise of America's Eastern European Jews. His work also encompasses several novels including The Auerbach Will, The LeBaron Secret, Shades of Fortune, and The Rothman Scandal, and other non-fiction titles such as California Rich, The Grandes Dames, and Life at the Dakota: New York's Most Unusual Address.