Rockhounding New England: A Guide to 100 of the Region's Best Rockhounding Sites (Paperback) 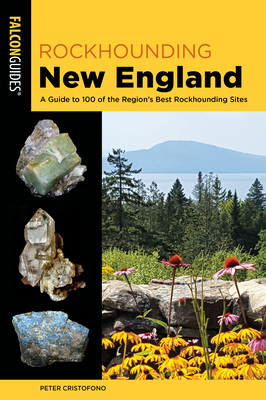 Rockhounding New England: A Guide to 100 of the Region's Best Rockhounding Sites (Paperback)


Available to Order - Usually Arrives in Our Store in 4 to 7 Days
New England is one of the best regions in the country for rockhounds to hunt for minerals, gems, and fossils. The complex geology of the region hosts a stunning variety of material from gold-bearing placers to fossiliferous limestone; from gem-bearing pegmatites to rocks containing some of the rarest minerals on Earth. This book provides detailed directions and GPS coordinates to the best sites with valuable tips on what to tools to bring and how to conduct your search. Comprehensive lists of minerals or fossils for each site and excellent color photos will help you know what to look for and to identify what you've found. Information on clubs, rock shops, museums, and special attractions are provided. Written by a collector with over 35 years of experience, Rockhounding New England is the first comprehensive rock and mineral collecting guide to New England and a must-have for anyone interested in collecting their own minerals, gems, and fossils in the region.
Peter Cristofono was born in Massachusetts and has been an avid field collector of New England minerals, gems and fossils for more than 35 years. Beginning with his high school years in New Hampshire and later while majoring in geology at Boston College he assembled a large collection of self-collected specimens from the region. Peter has served as president of the Boston Mineral Club and is currently a director of the Micromounters of New England. He has authored mineralogical articles for various publications and websites. He is well-known for his macro photos of minerals and insects which have appeared in major newspapers, magazines, books, scholarly journals, museum exhibits and various websites including over 3,700 mineral photos on Mindat.org. Peter spends as much time as he can in the field. His home base is Salem, Massachusetts.