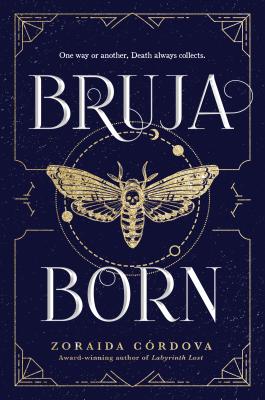 This is book number 2 in the Brooklyn Brujas series.

Next in the Brooklyn Brujas series of fantasy novels that follow three witch born sisters as they develop their powers and battle magic in their hometown and the worlds beyond, from the author of The Inheritance of Orquídea Divina.

Lula must let go of the ghosts of her past to face the actual living dead of her present.

Lula Mortiz feels like an outsider. Her sister's newfound Encantrix powers have wounded her in ways that Lula's bruja healing powers can't fix, and she longs for the comfort her family once brought her. Thank the Deos for Maks, her sweet, steady boyfriend who sees the beauty within her and brings light to her life. Then a bus crash turns Lula's world upside down. Her classmates are all dead, including Maks. But Lula was born to heal, to fix. She can bring Maks back, even if it means seeking help from her sisters and defying Death herself. But magic that defies the laws of the deos is dangerous. Unpredictable. And when the dust settles, Maks isn't the only one who's been brought back…

"Cordova keeps the flame on high… Fantasy and zombie fans looking for flavor—organ-meat, in particular—will not be disappointed." —New York Times Book Review

Perfect for fans of:

Zoraida Córdova is the author of the award-winning Brooklyn Brujas series and The Vicious Deep trilogy. Her short fiction has appeared in Star Wars: From a Certain Point of View, and Toil & Trouble: 15 Tales of Women and Witchcraft. She is the co-editor of Vampires Never Get Old, a YA anthology forthcoming from Imprint/Macmillan in fall 2020. Her upcoming YA novels include Star Wars: A Crash of Fate, and Incendiary, book one in the Hollow Crown duology (Disney/Hyperion 2020). Zoraida was born in Ecuador and raised in Queens, New York. When she isn’t working on her next novel, she’s planning her next adventure.


" Córdova blows the world of the "Brooklyn Brujas" series wide open...A fast-paced story sure to appeal to fans of the original and urban fantasy." — School Library Journal, starred review

"Córdova keeps the flame on high as Lula and her sisters strike risky deals and face demons...Fantasy and zombie fans looking for flavor — organ-meat, in particular — will not leave disappointed." — The New York Times

"Set in the backdrop of Brooklyn, Córdova creates a magical sequel that fans are sure to love." — BuzzFeed

"An exciting read with a wonderful Latinx feel woven throughout." — Kirkus Reviews

"The book is at its best examining the relationship between Lula and her sisters as brujas, but also as teens, who have the same yearnings and petty arguments as any girls. For readers coming for the ghouls, there are plenty of those, too." — Booklist

"Córdova brings the wonder and horror she created in Los Lagos to the streets of New York." — Bulletin of the Center for Children’s Books

"The series features strong, independent young women struggling to find their place in the world. They want things they can’t have, fight like hell for them anyway, then realize they already had everything they needed. The two novels (so far!) are full of adventure and derring-do, but while the plots are fast-paced and captivating, they aren’t frivolous or meaningless...If you loved either of those series, you’re gonna dig Brooklyn Brujas. I cannot recommend Zoraida Córdova highly enough." — TOR.com