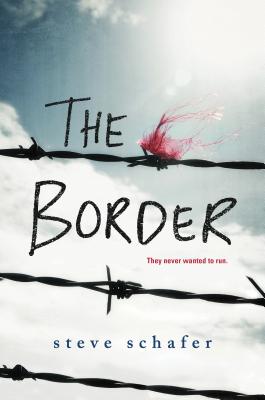 By Steve Schafer
$17.99
Available to Order - Usually Arrives in Our Store in 4 to 7 Days

This book is a phenomenal story that follows four teenagers on their quest to cross the border between the United States and Mexico. The story pulls the reader into feeling the same desperate emotions that the characters are feeling. This book was brilliantly written by Steve Schafer who not only encapsulates the experience of crossing the border, but also gives perspective to those who don’t understand the sacrifices made by illegal immigrants. In a world where society constantly demonizes illegal immigrants, it is refreshing to see a book showing their side of the story.

Perfect for readers of This Is Where it Ends, The Border is a gripping drama about four teens, forced to flee home after a deadly cartel rips apart their families. They must now face life-threatening danger and unimaginable sacrifice as they attempt to cross the U.S. border.

One moment changed their lives forever.

A band plays, glasses clink, and four teens sneak into the Mexican desert, the hum of celebration receding behind them.

Not fireworks--gunshots. The music stops. And Pato, Arbo, Marcos, and Gladys are powerless as the lives they once knew are taken from them.

Then they are seen by the gunmen. They run. Except they have nowhere to go. The narcos responsible for their families' murders have put out a reward for the teens' capture. Staying in Mexico is certain death, but attempting to cross the border through an unforgiving desert may be as deadly as the secrets they are trying to escape...