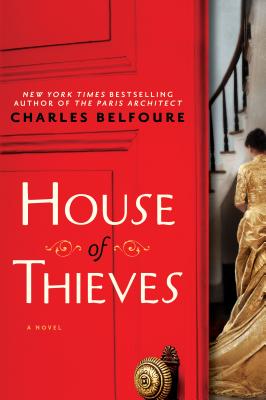 By Charles Belfoure
$15.99
On Our Shelves Now

“The Cross family has it all. Born into the wealthy class in the 1880s and related to the Astors of New York City, their lives are envied. John, the patriarch, is a highly regarded architect; his wife, Helen, a beauty; and his children, George, Julia, and Charlie, each accomplished. But all is not as it seems. George has a gambling problem, and his inability to control himself causes criminals to threaten his family for repayment. Belfoure weaves a fascinating story that reveals the descent of this family into the underworld of crime. The endeavor to save George and the drama that ensues not only captivates the Cross family, but the reader as well. A great read!”
— Stephanie Crowe (W), Page & Palette, Fairhope, AL

The world of old New York comes alive in this beguiling tale of mystery and intrigue... Charles Belfoure definitely has the touch.--Steve Berry, New York Times bestselling author of The Patriot Threat and The Lincoln Myth

In 1886 New York, a respectable architect shouldn't have any connection to the notorious gang of thieves and killers that rules the underbelly of the city. But when John Cross's son racks up an unfathomable gambling debt to Kent's Gents, Cross must pay it back himself. All he has to do is use his inside knowledge of high society mansions and museums to craft a robbery even the smartest detectives won't solve--the bigger the payout, the faster this will be over.

As he hones his talent for sniffing out vulnerable and lucrative targets, Cross becomes invaluable to the gang. But his entire life has become a balancing act, and it will only take one mistake for it all to come crashing down.

A fast-paced historical mystery, House of Thieves is perfect for the book club that loved A Gentleman in Moscow and The Art Forger, blending fine society with a brilliant cast of dubious characters.

Also by Charles Belfoure:
The Paris Architect
The Fallen Architect