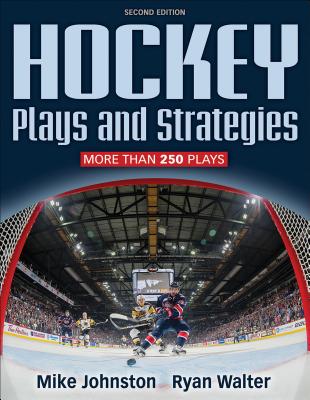 By Mike Johnston, Ryan Walter
$24.95
Available to Order - Usually Arrives in Our Store in 4 to 7 Days

Dominate the competition with hockey’s best-selling playbook. In Hockey Plays and Strategies, Second Edition, Mike Johnston and Ryan Walter combine decades of experience to bring you the ultimate guide to control the ice and light up the net.

Hockey Plays and Strategies features plays, systems, and strategies for game play in the offensive, neutral, and defensive zones. With tactics for all players in each of the various zones, you can prepare players to hit the ice with confidence and dominate their opponents. You’ll find detailed plays on entering the offensive zone with a dump-in or chip-and-chase, covering shorthanded goals, and using hybrid icing as an offensive advantage. You’ll also find tips and 10 key strategies for winning face-offs.

The detailed instruction for specific skills, techniques, position responsibilities, and team player requirements will help you learn optimal execution of the following:

• Faceoff plays for each zone

To wrap it all up, you’ll even be able to plan for your opponent with tips on scouting the competition and adjusting your game strategy accordingly. No matter what level you coach, Hockey Plays and Strategies will guide smart, consistent, and winning play.

Mike Johnston is the vice president, head coach, and general manager of the Portland Winterhawks hockey team (Western Hockey League), where he was recently named the Western Conference Coach of the Year.

Johnston’s coaching career began at the age of 23 at Augustana University College in Alberta. In 1989, he took over as head coach of the UNB Varsity Reds of the AUS. During a five-year span as coach of the UNB squad, Johnston’s teams won three conference championships. He was an associate coach for the Los Angeles Kings and the Vancouver Canucks over an eight-year span. As the coach and general manager of the Winterhawks from 2008 to 2014, he amassed a record of 231-114-10-10, winning four conference championships and landing him second on the Winterhawks’ all-time wins list. Johnston returned to the National Hockey League (NHL) as head coach for the Pittsburgh Penguins for the 2014-2015 season. Johnston ended up coaching 110 games in Pittsburgh and finished with a record of 58-37-15.

Over his coaching career, Johnston has had extensive experience in international play. In 1994, Johnston became general manager and associate coach of the Canadian national men's hockey team, followed by a one-season stint as head coach in 1998. He won gold medals at the 1997 and the 2007 World Hockey Championships, along with a silver medal in 1996 and a bronze medal in 1995. In 1994 and 1995, Johnston's teams won gold at the World Junior Ice Hockey Championships. He was also on the coaching staff as an assistant coach with the first-ever NHL entry at the Olympic Games in Nagano, Japan.

In addition to his education and kinesiology degrees, Johnston completed his master’s degree in coaching science at the University of Calgary.

Ryan Walter played and coached 17 seasons and more than 1,100 games in the National Hockey League. Drafted second overall by the Washington Capitals in 1978, Walter was named the youngest NHL captain in his second of four seasons. He went on to play nine seasons with the Montreal Canadiens, winning a Stanley Cup in 1986. He returned to his hometown to play his last two years for the Vancouver Canucks.

Walter was named captain of Team Canada in the World Junior Tournament, was selected to play in the NHL All-Star game in 1983, and played for Team Canada in three world championships. He became a vice president of the National Hockey League Players’ Association and was honored as NHL Man of the Year in 1992. Ryan has also served as a minor hockey coach, an assistant coach with the Vancouver Canucks, and the head coach of the Canadian national women’s team.

Walter has a master of arts degree in leadership/business, is the author of five books, and is a regular contributor to online and print magazines, newspapers, radio, and television. He is the cofounder and president of two start-up companies, and he has served as an NHL and IIHF coach, a TV hockey broadcaster, a hockey adviser and actor for both television and movies, and president of a professional hockey team. Currently, Ryan’s passion for training leaders, coaches, and high performers gets activated every day as he works with companies, corporations, and sports teams to increase their performance energy and synergize their cultural teams.