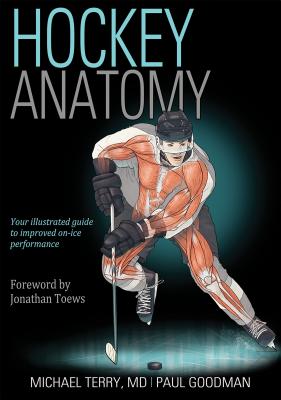 By Michael Terry, Paul Goodman, Jonathan Toews (Foreword by)
$24.95
Special Request - May Not Be Available

Are you ready to see what it takes to lace up the skates? Hockey Anatomy will show you how to improve on-ice performance by increasing muscular strength and optimizing efficiency of every movement.

Dr. Michael Terry, the team physician for the NHL’s Chicago Blackhawks, and Paul Goodman, the strength and conditioning coach for the Chicago Blackhawks, share 96 of the most effective hockey exercises, each with step-by-step descriptions and full-color anatomical illustrations to show the muscles in action. You’ll also find 68 exercise variations to increase difficulty, add complex movements, or simply change up your routine.

Hockey Anatomy goes beyond the exercises by taking you onto the ice and into the action. Illustrations of the muscles involved in shooting, passing, and stopping the puck show you how the exercises are fundamentally linked to hockey performance. No matter your position, or your hockey skill set, there is something here for you.

You’ll also go into the training room to explore the anatomy of common injuries as well as exercises for minimizing and recovering from such setbacks.

Hockey Anatomy is essential reading for players, coaches, trainers, and fans of the sport. If you love the action and artistry of hockey, you are going to love this book.

Terry completed a residency at Cornell University's prestigious Hospital for Special Surgery, where he was part of a team that was awarded one the most coveted research awards in shoulder surgery, the Neer Award. He then traveled to Vail, Colorado, for his sports medicine fellowship at the renowned Steadman Hawkins clinic.

Prior to joining the team at Northwestern, Terry was a faculty member at the University of Chicago. While there, he performed research and maintained a very busy practice in sports medicine and shoulder surgery. His medical school students selected Terry as their favorite faculty member.

Paul Goodman is the strength and conditioning coach for the Chicago Blackhawks and is responsible for preparing yearlong on- and off-ice training regimens for all players within the organization. He also works in conjunction with the sports medicine staff by assisting in the rehabilitation process for injured athletes.

“Paul Goodman is always striving to perfect his craft on player development. He’s committed to maximizing results. Paul has one goal in mind, not only for himself, but his players as well... to be the best! In Hockey Anatomy, he shares that expertise with you.”