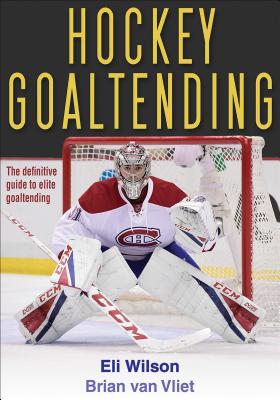 By Eli Wilson, Brian van Vliet
$21.95
Available to Order - Usually Arrives in Our Store in 4 to 7 Days

Awareness, anticipation, physical conditioning . . . these are just some of the qualities a goaltender needs to bring onto the ice at game time. Excellence requires practice, consistency, and understanding—of the position, the situation, and your talents.

No one knows this better than Eli Wilson does. Widely recognized as the leading authority on goaltending, he has worked alongside 30 NHL goaltenders, including Carey Price, Ray Emery, Tuukka Rask, and Brian Elliott.

In Hockey Goaltending, Eli Wilson and Brian van Vliet have created the definitive guide to stopping more pucks, winning more games, and lowering your goals against average. Inside, you will find coverage on every facet of the position:

• Selection of the right equipment for fit and functionality

• Stance and presence in the net, including footwork, stick placement, and body positioning

• Puck stopping, from save selection to execution

• Focus and visualization methods to improve the mental game

• On- and off-ice drills and training programs for year-round conditioning to increase strength, stamina, speed, and agility

From skills to strategies, equipment to exercises, Hockey Goaltending covers the position like no other. Packed with drills, step-by-step instructions, photos, diagrams, and coaching tips, this book touches on every aspect of the game so you can compete at the highest level.

Eli Wilson has established himself as one of the premier goaltending coaches in the world. He has worked with dozens of goaltenders in the National Hockey League (NHL), including Carey Price, Ray Emery, Tim Thomas, Tuukka Rask, Brian Elliott, Jason LaBarbera, and Devan Dubnyk.

In 2004, Eli founded World Pro Goaltending and singlehandedly developed it into one of the largest goaltending schools and training facilities in Canada. When he departed from the company in 2009, World Pro Goaltending was performing more than 5,000 one-on-one training sessions annually, along with numerous camps, including the world-renowned Elite Prospects and Professional (NHL) camps.

In 2004, Eli was also named to Hockey Canada's goaltending consultant group, along with Francois Allaire, David Marcoux, and Sean Burke. Since 2004, he has consulted with Creative Artists Agency (CAA) Sports during their summer development camps for top young prospects in Los Angeles, California. In 2007, Eli traveled to South Korea to work with the Kangwon Land Ice Hockey team and other young goaltenders in the country.

From 2007 through 2010, Eli was the goaltending coach for the Ottawa Senators, where he was responsible for the Ottawa Senators goaltenders as well as for the goalies playing for their AHL affiliate, the Binghamton Senators. In February 2011, Eli was hired by the Anaheim Ducks to work as the goaltending consultant for their affiliate, the Syracuse Crunch. The Crunch had their strongest run of the season while Eli was on staff, and it pushed Ray Emery's return to the NHL.

In 2010, Eli established Eli Wilson Goaltending. Today, Eli Wilson Goaltending is a world leader in goaltending development. Eli runs goaltending camps, clinics, and consults worldwide. In 2016, Eli introduced a number of specialty camps, including the popular 24/7, where goaltenders actually live and train with Eli over a three-day weekend. He has skill-specific camps, including puck-handling camps, and in 2017 teamed up with world-renowned skills coach Darryl Belfry, bringing together top prospect forwards and goaltenders to create a high-intensity training environment. A main staple of Eli's year-round training is advanced video technology, whereby he and his staff can analyze video remotely to further goaltending development.

Brian van Vliet has a diverse sporting background. He played competitive soccer for six years and competed in numerous bodybuilding competitions, including the prestigious 1993 Canadian Bodybuilding Championships in Montreal, Quebec. Having studied the position of goaltending for many years, Brian was a member of the board of directors for a local hockey association and served as the goalie coordinator for three years. He was responsible for the evaluation and placement of over 70 goaltenders annually.

Brian was an associate writer of Eli Wilson''s In the Crease column for the Alberta edition of Hockey Now magazine and later went on to author his own monthly opinion piece for the same publication. His experience as a continuous improvement professional in the oil and gas industry gives him a unique and analytical approach to the game of hockey. Having attained a business management degree from Davenport University, Brian is currently the vice president of business operations for Eli Wilson Goaltending and works as a real estate agent in Calgary.

“Eli Wilson’s approach and mindset helped me break into the best league in the world with confidence. Both are on display for you in Hockey Goaltending.”

“Eli is sharing a lifetime’s worth of learned secrets in Hockey Goaltending. I am happy to know that the next Patrick Roy, Martin Brodeur, or Carey Price will have taken part of their game from my good friend Eli.”

“I have worked with Eli pretty much since I started playing goal as a kid. The things that have always stood out to me are his intensity on the ice and his genuine passion for the position. I continue to enjoy working with him and talking with him about goaltending to this day.”

“Eli Wilson is always exploring and instituting new ways and ideas to help goaltenders become more proficient and consistent in their position. Our goaltending world is an ever-changing environment where technical modifications occur almost yearly, and the dialogue he and I have shared over the past decade has been invaluable to me as a coach.”