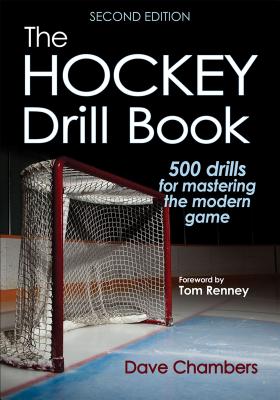 By Dave Chambers, Tom Renney (Foreword by)
$23.95
Available to Order - Usually Arrives in Our Store in 4 to 7 Days

The best-selling hockey drill book returns, bigger and better than ever! Now with 500 drills for all aspects of the game, The Hockey Drill Book, Second Edition, is a must-have for every coach and player!

With more than 40 years at the junior, university, NHL, international, and World Championship levels, five-time Coach of the Year Dave Chambers has spent countless hours on the ice developing players at every level. Practice after practice, he puts drills to the test, compiling the best here in The Hockey Drill Book.

Whether your goal is to raise your game or coach your team to the top, The Hockey Drill Book is the go-to resource. It’s the only drill book you’ll ever need.

Dave Chambers has coached hockey for more than 40 years from key developmental levels to the National Hockey League and international competition. His experience with all types of players and styles makes him well suited for teaching the ever-evolving game that is a blend of the European and North American styles. Chambers has won two gold medals in World Championships, five university championships, and five Coach of the Year awards. He was named Master Coach by the Canadian Hockey Association and was inducted into the York University (Toronto, Canada) Sports Hall of Fame in 2006 and the University of British Columbia Sports Hall of Fame in 2001.

Chambers holds a PhD in sport science and was director of the coaching program at York University in the School of Kinesiology and Health Science. Chambers has written books and articles on coaching ice hockey and has made numerous presentations worldwide. He lives in Collingwood, Ontario.

“For more than 40 years Dave Chambers has been sharing his exceptional knowledge and wisdom as a coach, teacher, and specialist within the world of hockey. His brilliant forward-thinking instruction guides are long lasting yet new to coaches everywhere. He is a world-renowned student and teacher of the game and a man I admire and greatly respect. His information is useful to coaches everywhere.”

“The Hockey Drill Book demonstrates Dave Chambers’ intimate knowledge of the game. He has the ability to simplify every skill set. This collection of drills is an absolute must for individual player and team development.”