Devices of the Soul: Battling for Our Selves in an Age of Machines (Paperback) 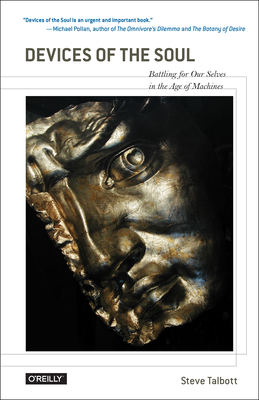 Devices of the Soul: Battling for Our Selves in an Age of Machines (Paperback)

Self-forgetfulness is the reigning temptation of the technological era. This is why we so readily give our assent to the absurd proposition that a computer can add two plus two, despite the obvious fact that it can do nothing of the sort--not if we have in mind anything remotely resembling what we do when we add numbers. In the computer's case, the mechanics of addition involve no motivation, no consciousness of the task, no mobilization of the will, no metabolic activity, no imagination. And its performance brings neither the satisfaction of accomplishment nor the strengthening of practical skills and cognitive capacities.

In this insightful book, author Steve Talbott, software programmer and technical writer turned researcher and editor for The Nature Institute, challenges us to step back and take an objective look at the technology driving our lives. At a time when 65 percent of American consumers spend more time with their PCs than they do with their significant others, according to a recent study, Talbott illustrates that we're forgetting one important thing--our Selves, the human spirit from which technology stems.

Whether we're surrendering intimate details to yet another database, eschewing our physical communities for online social networks, or calculating our net worth, we freely give our power over to technology until, he says, we arrive at a computer's-eye view of the entire world of industry, commerce, and society at large...an ever more closely woven web of programmed logic.

After a several-year stint in organic farming, Steve Talbott began working in the high-tech industry in 1981 as a technical writer and software programmer. His 1995 book, The Future Does Not Compute: Transcending the Machines in Our Midst, was named one of the Best Books of 1995 by UNIX Review and was chosen by the library journal Choice for its 1996 list of Outstanding Academic Books. In the years since then Steve has produced over 165 issues of the highly regarded online newsletter, NetFuture - Technology and Human Responsibility (http: //netfuture.org), from which the contents of this current book are drawn. In a New York Times feature article about Steve's work, NetFuture was termed a largely undiscovered national treasure. Since 1998 Steve has been a Senior Researcher at The Nature Institute in Ghent, New York (http: //natureinstitute.org). He is currently working on issues relating to the establishment of a new, qualitative science (http: //qual.natureinstitute.org).