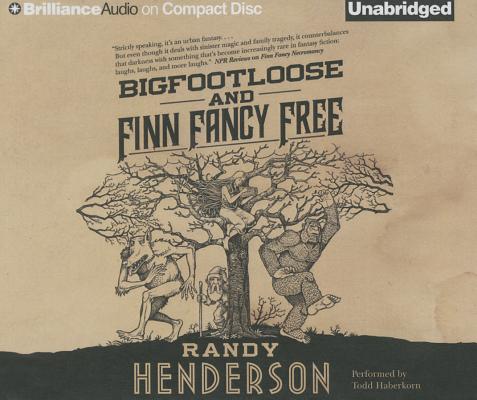 By Randy Henderson, Todd Haberkorn (Read by)
$24.99
Hard to Find

Randy Henderson continues his dark and quirky urban fantasy series with Bigfootloose and Finn Fancy Free, set in a world of arcane beings hidden among the mundane townies of Port Townsend, Washington. In this sequel to Randy Henderson's acclaimed debut novel, Finn Fancy Necromancy, Finn Gramaraye is settling back into the real world after his twenty-five-year-long imprisonment in the otherworld of the Fey. He's fallen in love with a woman from his past, though he worries she may love a version of him that no longer exists. He's proven his innocence of the crime of Dark Necromancy, and he's finding a place in the family business--operating a mortuary for the Arcane, managing the magical energies left behind when an Arcane being dies to prevent it from harming the mundane world.

But Finn wants more. Or different. Or something. He's figured out how to use the Kinfinder device created by his half-mad father to find people's True Love, and he'd like to convert that into an Arcane Dating Service. It's a great idea. Everyone wants True Love Unfortunately, trouble always seems to find Finn, and when he agrees to help his friend, the Bigfoot named Sal, they walk right into a Feyblood rebellion against the Arcane Ruling Council, a rebellion being fomented by unknown forces and fueled by the drug created by Finn's own grandfather.