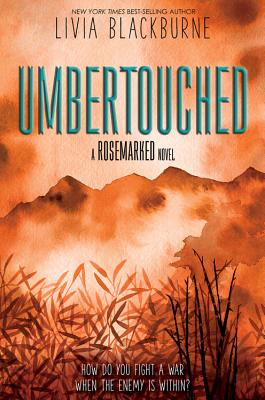 By Livia Blackburne
$17.99
Available to Order - Usually Arrives in Our Store in 4 to 7 Days

Healer and warrior must find the courage to save their people, expose the truth, and face the devastating consequences headed their way in the sequel to Rosemarked by New York Times bestselling author Livia Blackburne.

The mission was a failure. Even though Zivah and Dineas discovered a secret that could bring down the empire, their information is useless without proof. Now, with their cover blown and their quest abandoned, their only remaining hope is to get home before Ampara brings the full might of its armies against their peoples.

As Shidadi and Dara alike prepare for war, Zivah and Dineas grapple with the toll of their time in the capital. After fighting alongside the Amparans against his own kin, can Dineas convince the Shidadi—and himself—where his loyalties lie? After betraying her healer's vows in Sehmar City, can Zivah find a way to redeem herself—especially when the Dara ask her to do the unthinkable? And after reluctantly falling in love, what will the two do with their lingering feelings, now that the Dineas from Sehmar City is gone forever?

And when Zivah's plague symptoms surface once again, she must decide how she'll define the life she has left.... How do you fight a war when the enemy is within? Perfect for fans of Sabaa Tahir and Tomi Adeyemi, this epic fantasy novel delves into complex ethical dilemmas and has palpable tension between the two romantic leads.

New York Times bestselling author Livia Blackburne is a Chinese American author who wrote her first novel while researching the neuroscience of reading at the Massachusetts Institute of Technology.  Since then, she’s switched to full time writing, which also involves getting into people’s heads but without the help of a three tesla MRI scanner. She is the author of The Midnight Thief (an Indies Introduce New Voices selection) and Rosemarked (a YALSA Teens Top Ten nominee), as well as the picture book I Dream of Popo , which received starred reviews from Publishers Weekly and Kirkus.

"This is an engrossing story with potential for deep discussion on loyalty, ethics, and the true meaning of strength."—Booklist

"Blackburne adds to the construction of her story with strong thematic bricks, exploring ideas such as loyalty and trust, as well as compassion and inner peace."—Teenreads

"This is a fast-paced, well-written, can't-put-down fantasy that will appeal to a wide audience."—SLJ

"Readers will be rewarded with an intricately choreographed conclusion and a high-stakes cliffhanger that sets up a sequel. Arguments against prejudice share the page with questions of faith in the face of tragedy. "—Publishers Weekly

"Readers will find the characters engaging, and they will have a sense of the intriguing tribal histories behind them.
A dark tale filled with tension and secrets and lightened by two brave companions."—Kirkus Reviews

"Blackburne’s latest is an engaging, mesmerizing read. With a clever, unique, premise, readers will be drawn into this story from the start."—RT Book Reviews