The Zero Marginal Cost Society: The Internet of Things, the Collaborative Commons, and the Eclipse of Capitalism (Compact Disc) 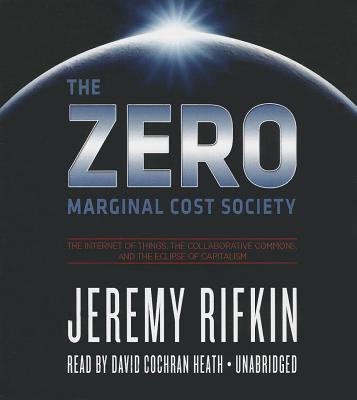 The Zero Marginal Cost Society: The Internet of Things, the Collaborative Commons, and the Eclipse of Capitalism (Compact Disc)


Title unavailable, please email for information.
In The Zero Marginal Cost Society, New York Times bestselling author Jeremy Rifkin argues that the capitalist era is passing--not quickly, but inevitably. The emerging Internet of Things is giving rise to a new economic system that will transform our way of life.In this provocative new book, Rifkin argues that the coming together of the Communication Internet with the fledgling Energy Internet and Logistics Internet in a seamless twenty-first-century intelligent infrastructure--the Internet of Things--is boosting productivity to the point where the marginal cost of producing many goods and services is nearly zero, making them essentially free. The result is that corporate profits are beginning to dry up, property rights are weakening, and the conventional mind-set of scarcity is slowly giving way to the possibility of abundance. The zero marginal cost phenomenon is spawning a hybrid economy--part capitalist market and part "collaborative commons"--with far-reaching implications for society.Rifkin describes how hundreds of millions of people are already transferring parts of their economic lives from capitalist markets to what he calls the global Collaborative Commons. "Prosumers" are making and sharing their own information, entertainment, green energy, and 3-D printed products at near zero marginal cost. They are also sharing cars, homes, clothes, and other items via social media sites, redistribution clubs, and cooperatives at low or near zero marginal cost. Students are even enrolling in free MOOCs, massive open online courses that operate at near zero marginal cost. And young social entrepreneurs are establishing ecologically sensitive businesses using crowdfunding as well as creating alternative currencies in the new sharing economy. In this new world, social capital is as important as financial capital, access trumps ownership, cooperation supersedes competition, and "exchange value" in the capitalist marketplace is increasingly replaced by "sharable value" on the Collaborative Commons.Rifkin concludes that while capitalism will be with us for the foreseeable future, albeit in an increasingly diminished role, it will not be the dominant economic paradigm by the second half of the twenty-first century. We are, Rifkin says, entering a world beyond markets, where we are learning how to live together in an increasingly interdependent global Collaborative Commons.