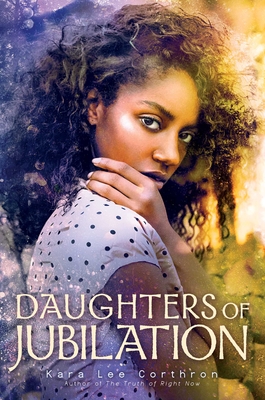 From the award-winning author of The Truth of Right Now comes a stunning, grounded fantasy in the vein of Dread Nation that follows a black teen as she finds her place among a family of women gifted with magical abilities.

In the Jim Crow South, white supremacy reigns and tensions are high. But Evalene Deschamps has other things to worry about. She has two little sisters to look after, an overworked single mother, and a longtime crush who is finally making a move.

On top of all that, Evvie’s magic abilities are growing stronger by the day. Her family calls it jubilation—a gift passed down from generations of black women since the time of slavery. And as Evvie’s talents waken, something dark comes loose and threatens to resurface…

And when the demons of Evvie’s past finally shake free, she must embrace her mighty lineage, and summon the power that lies within her.
Kara Lee Corthron is an author, playwriter, and TV writer based in Los Angeles. She’s the author of The Truth of Right Now, winner of the Parent’s Choice Gold Award, and Daughters of Jubilation. Her plays, including What Are You Worth?, Welcome to Fear City, AliceGraceAnon, and Holly Down in Heaven, have been performed across the US, and she writes for the TV thrillers You (Netflix) and The Flight Attendant (HBO Max). She’s a multiyear MacDowell Fellow and a resident playwright at New Dramatists.
An Amazon Best Book of the Month
A Bustle Most Anticipated Book of October 2020
A Junior Library Guild Selection
A Parade Best New Historical Novel of Fall 2020
A BuzzFeed YA Book by Black Authors We’re Excited to Read in 2020
A Teen Vogue Must-Read Book by Black Authors Coming out in 2020

“A lyrical novel about a young Black woman discovering her power.” —PopSugar

“The exploration of home, and the reflection on how a place where you can’t be safe can nevertheless be called home, is powerful. A compelling story of first love and battling racism with a magical twist.” —Kirkus, starred review

“A well-told, fast-paced story about a teenage girl coming of age, while coming to terms with her family’s legacy.” —SLJ, starred review

“Corthron brings her writing talent to the realm of YA with a powerful story about a magic-wielding Black teen in the Jim Crow South...Corthron inventively explores America’s heinous racist history while telling the story of a Black teen grappling with a hostile culture on top of ordinary teenage growing pains, like a first crush. Readers swept up by Justina Ireland’s Dread Nation series will gravitate to this historical fantasy, almost as if by magic.” —Booklist

“The legacy of slavery, the persistence of racism, and the intergenerational trauma experienced by Black women and girls are explored with a deft hand. . . . Evvie’s narration is bold and self-assured.” —BCCB