Naughty Mabel Sees It All (Hardcover) 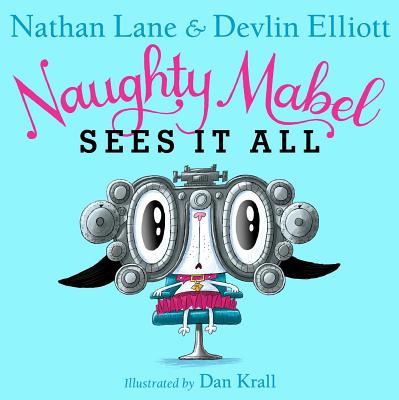 By Nathan Lane, Devlin Elliott, Dan Krall (Illustrator)
$17.99
Available to Order - Usually Arrives in Our Store in 4 to 7 Days

Naughty Mabel’s back, darlings, and this time she’s causing double the trouble as she starts seeing things no one else can in this charmingly hilarious follow-up to Naughty Mabel from film and Broadway star Nathan Lane (of The Lion King and The Producers fame) and Devlin Elliott!

Mabel’s back and now it’s her turn to party. Slumber party that is! Mabel’s best friends Smarty Cat and Scaredy Cat have invited her over for a sleepover, could there be anything more divine?

There’s only one thing that could ruin such a sensational soiree: monsters! They’re everywhere she looks, and sometimes she even sees two at once!

But these silly monsters don’t know who they’re dealing with. Mabel’s not afraid. She’s just going to have to put her naughty behavior to good use to save Smarty and Scaredy. Problem is, the monsters aren’t the only things that seem to be multiplying. Mabel seems to be seeing two of everything. Are there really monsters? Or is there something more going on? As in is it time for Mabel to get...glasses?

Nathan Lane is an award-winning star of stage, screen, and television. In the theater he has won two Tony awards, five Drama Desk awards, two Obies, and the Olivier award. In 2008 he was inducted into the American Theater Hall of Fame. On television he has had recurring roles on American Crime Story, Modern Family, and The Good Wife. He has received six primetime Emmy nominations, two daytime Emmy awards, and the People’s Choice award. He has made over thirty-five films, including The Birdcage, The Lion King, Mousehunt, Stuart Little, The Producers, and Carrie Pilby.

Devlin Elliott is the co-owner of Maberry Theatricals, Inc. and is a Tony-nominated Broadway/Off-Broadway and West End producer. As a writer he’s recently finished his first play, a television pilot, and the second Naughty Mabel book with Nathan.

Dan Krall is an author, illustrator, and an animator. He worked as a character designer on the popular films How to Train Your Dragon and Coraline. He was also the art director for the television shows Scooby Doo! Mystery Incorporated, Chowder, and Samurai Jack, as well as a Development Artist for Foster’s Home for Imaginary Friends, The PowerPuff Girls, and Dexter’s Laboratory. He lives with his wife and daughter in Los Angeles.

"An enjoyable read-aloud; kids may gain a more positive perspective on sporting spectacles from the story as well."
— School Library Journal

"Mabel is a charming character...this is a good choice for younger readers, especially those who love silly, fancy, or puppy stories. Recommended."
— School Library Connection