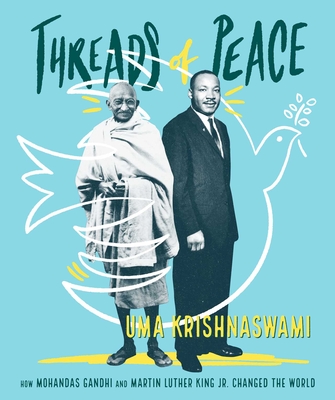 Mohandas Gandhi and Reverend Martin Luther King Jr. both shook and changed the world in their quest for peace among all people, but what threads connected these great activists together in their shared goal of social revolution?

A lawyer and activist, tiny of stature with giant ideas, in British-ruled India at the beginning of the 20th century.

A minister from Georgia with a thunderous voice and hopes for peace at the height of the civil rights movement in America.

Born more than a half-century apart, with seemingly little in common except one shared wish, both would go on to be icons of peaceful resistance and human decency. Both preached love for all human beings, regardless of race or religion. Both believed that freedom and justice were won by not one, but many. Both met their ends in the most unpeaceful of ways—assassination.

But what led them down the path of peace? How did their experiences parallel...and diverge? Threads of Peace keenly examines and celebrates these extraordinary activists’ lives, the threads that connect them, and the threads of peace they laid throughout the world, for us to pick up, and weave together.
Uma Krishnaswami is the author of several books for children including The Grand Plan to Fix Everything and The Problem with Being Slightly Heroic. She was born in New Delhi, India, and now lives in British Columbia, Canada.
History has been carefully intertwined with the present in this engaging and reflective book.
— Kirkus Reviews, starred review