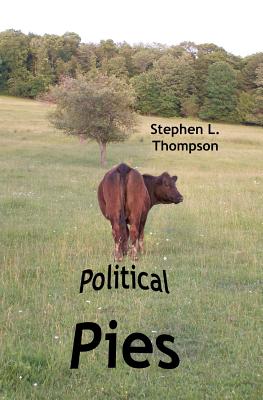 By Stephen L. Thompson
$8.00
Available to Order - Usually Arrives in Our Store in 4 to 7 Days

Everybody complains about politics, but does anyone do anything about it? Stephen L. Thompson's attempt to do something about it is to collect forty of his short stories with a political element into his Political Pies anthology. His stories are either politically neutral or equally condemning of the national parties. Instead of trying to sway you to one ideology or another, his goal is to just get people thinking about politics in the hopes a rose might grow out of all the political manure.
Book excerpt - story "Is That How it Works?"
"Next question."
A middle-aged gentleman walked up to the microphone at the front of the auditorium. He cleared his throat, then said, "Senator, on the campaign trail you have often stated that the rich and powerful - both individual and corporate - should receive tax breaks because they are the job creators."
"That's correct."
The man took a piece of paper out of his pocket and unfolded it. "Sir, I've been unemployed for twenty months now." He held the piece of paper up so everyone could see it was a check. "This is the last of my life savings." He tossed the check up onto the stage about ten feet from the candidate. "I give it to you so that you - as the nearest I'll get to the rich and powerful - now have all of the money that matters to me. Now give me a goddamn job

Stephen L. Thompson grew up - as he likes to say - a short drive from the middle of nowhere on his family's farm in northwestern Pennsylvania. He graduated from West Chester University with a BS in Physics. After seven years working as a lab technician at an industrial fluids company just outside of Philadelphia, he's returned to the peace and quiet of the country to write. He writes mostly short, science fiction, but he dabbles in other lengths and genres.