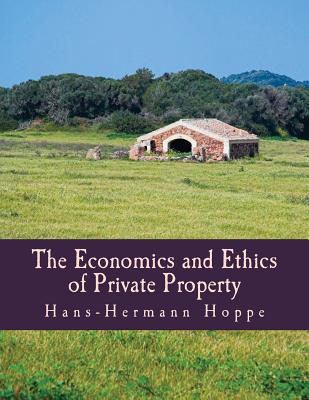 
Available to Order - Usually Arrives in Our Store in 4 to 7 Days
LARGE PRINT EDITION More at LargePrintLiberty.com. "Do not steal" is an excellent principle of ethics; it is also the first principle of sound economic systems. In our time, no one has done more than Hans-Hermann Hoppe to elaborate on the sociological implications of this truth. And this is his great work on the topic.The Austrian tradition is known for offering the most hard-core defense of private property, and the most consistent application of that principle, of any school of economics. The work of Hoppe--a leading student of Rothbard's whose books have been translated into a dozen languages--has focused heavy philosophical and economic attention on this principle.This book, the 2nd expanded edition after a long period in which it has been unavailable, collects his most important scholarly essays on the topic.The topics covered by Hoppe are wide ranging: employment, interest, money, banking, trade cycles, taxes, public goods, war, imperialism, and the rise and fall of civilizations. The core theoretical insight uniting the entire discussion is as consistently applied here as it is neglected by the economic mainstream: the absolute inviolability of private property as a human right as the basis of continuous economic progress.The right to private property is an indisputably valid, absolute principle of ethics, argues Hoppe, and the basis for civilizational advance. Indeed, it is the very foundation of social order itself. To rise from the ruins of socialism and overcome the stagnation of the Western welfare states, nothing will suffice but the uncompromising privatization of all socialized, that is, government, property and the establishment of a contractual society based on the recognition of private property rights.Hans Hermann-Hoppe is professor of economics at the University of Nevada, Las Vegas, and a senior fellow of the Ludwig von Mises Institute. This edition is an expansion of the original edition (1993), with new essays on epistemology, ethics, and economics.