Living with the Monks: What Turning Off My Phone Taught Me about Happiness, Gratitude, and Focus (Paperback) 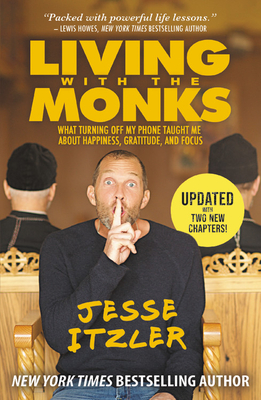 Living with the Monks: What Turning Off My Phone Taught Me about Happiness, Gratitude, and Focus (Paperback)


Available to Order - Usually Arrives in Our Store in 4 to 7 Days
Equal parts memoir and road map to living a less stressful and more vibrant life, bestselling author Jesse Itzler offers an illuminating, entertaining, and unexpected trip for anyone looking to feel calmer and more controlled in our crazy, hectic world.

Entrepreneur, endurance athlete, and father of four Jesse Itzler only knows one speed: Full Blast. But when he felt like the world around him was getting too hectic, he didn't take a vacation or get a massage. Instead, Jesse moved into a monastery for a self-imposed time-out. In Living with the Monks, the follow-up to his New York Times bestselling Living with a SEAL, Jesse takes us on a spiritual journey like no other.
Having only been exposed to monasteries on TV, Jesse arrives at the New Skete religious community in the isolated mountains of upstate New York with a shaved head and a suitcase filled with bananas. To his surprise, New Skete monks have most of their hair. They're Russian Orthodox, not Buddhist, and they're also world-renowned German shepherd breeders and authors of dog-training books that have sold in the millions.

As Jesse struggles to fit in amongst the odd but lovable monks, self-doubt begins to beat like a tribal drum. Questioning his motivation to embark on this adventure and missing his family (and phone), Jesse struggles to balance his desire for inner peace with his need to check Twitter. But in the end, Jesse discovers the undeniable power of the monks and their wisdom, and the very real benefits of taking a well-deserved break as a means of self-preservation in our fast-paced world.
Jesse Itzler only eats fruit 'til noon, loves Run-D.M.C., and enjoys living life "out of the box." In fact, he doesn't even have a box. The author of the New York Times bestseller, Living with a SEAL, cofounded Marquis Jet, the world's largest private jet card company which he and his partner sold to Berkshire Hathaway/NetJets.

Jesse then partnered with Zico coconut water, which he and his partner sold to The Coca-Cola Company. He's a former rapper on MTV and wrote and performed the NBA's Emmy Award-winning "I Love This Game" music campaign and the popular New York Knicks anthem "Go NY Go." When he's not running ultra-marathons, eating vegan food or being a dad to his four kids, Jesse can be found at the NBA's Atlanta Hawks games, where he's an owner of the team. He is married to Spanx founder Sara Blakely.

"At a time when stress and burnout have become global epidemics, along comes Jesse Itzler to remind us how important it is to be present, intentional and connect with ourselves and with what really matters. With wisdom and humor, he takes us not just inside the monastery but inside ourselves, toward a life of more stillness, more presence, more patience and more gratitude."—Arianna Huffington

Praise for Living with a SEAL:
It's hilarious!—LeBron James

"This is 100% Jesse. Do it differently and you get different results. That's the way he has operated his entire life and it has worked beautifully."—Mike "Coach K" Krzyzewski, Duke Basketball head coach

"Most of us go through life on auto-pilot. New day...same routine. This guy beamed a "live action hero" into his living room for 31 days to shake up his life. Sometimes you have to have the guts to do something radical to get results."—Dolvett Quince, The Biggest Loser

"Jesse knows what it takes to succeed in business and in life - a Don't Quit attitude! Our US Military embraces that attitude in training and survival, no one more so than the elite Navy SEALs. When my pal invites SEAL into his world, Jesse's life is never the same again! The relationship between these guys is outrageous - it's like the Fresh Prince of Bel-Air meets Rambo! But with all the insanity there are strong life messages, hysterical moments, and great lessons to be learned. Like Jesse, this book is a HIT!"—Jake Steinfeld, chairman and founder of Body by Jake

"George Foreman once gave me great advice. When I told him my husband ran 100 miles non-stop he said, 'Sara, don't try to understand a man like that. Just love him."—Sara Blakely, Founder of SPANX, Jesse's wife

"Living With A Seal is funny and compelling with practical wisdom that leaves the reader feeling elevated and empowered. It also deeply impacted my own personal journey to health, fitness and well being."—Cory Booker, US Senator for New Jersey