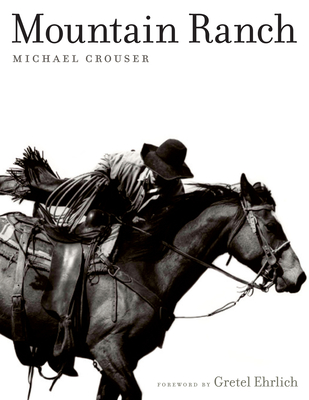 By Michael Crouser, Gretel Ehrlich (Foreword by)
$40.00
On Our Shelves Now

"The ranches where Michael Crouser so affectionately captures these scenes tell a story of staying power, of joy in the beauty of the world, of gratitude for the working animals--the dogs and the horses--of midwifery and husbandry, of seeing the seasons through. . . . It is a pleasure to be brought into this out-of-the-way part of the world with such understated passion."
--Gretel Ehrlich, from the introduction

The mountain ranches of western Colorado preserve a way of life that has nearly vanished from the American scene. Families who have lived on the same land for five or six generations raise cattle much as their ancestors did, following an annual cycle of breeding, birthing, branding, grazing, and selling livestock. Michael Crouser spent more than a decade (2006-2016) photographing family cattle ranches in Colorado, intrigued "not by the ways their lives are changing but by the way they have stayed the same." He was, he says, "most interested in the traditional elements of these traditional lives, . . . what they call 'cowboying.'"

Intimate without being sentimental about the realities of ranch work, Mountain Ranch's duotone images capture the raw and basic elements of a hard and basic life. In the afterword, Crouser pays verbal tribute to ranch people who are "the real deal," whose seasonal round of work forms the subject of the acclaimed nature writer Gretel Ehrlich's foreword. Portraits of eight men and women who eloquently describe their long lives on Colorado mountain ranches complete the volume.

The ever-increasing commercial and residential development of traditional ranch land and the economic difficulties facing a new generation of ranchers threaten the future of cattle ranching in the mountains of Colorado. Mountain Ranch powerfully records the last vestiges of a tradition that exerts a nearly universal fascination and mystique--cowboying in the American West.