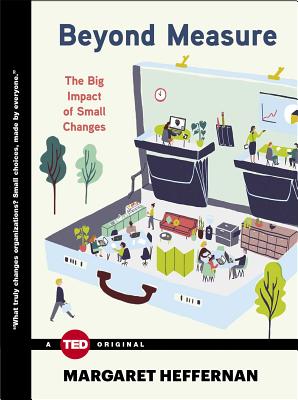 
Available to Order - Usually Arrives in Our Store in 4 to 7 Days
A powerful manifesto for CEOs and employees alike: Influential and award-winning business leader Margaret Heffernan reveals how organizations can build ideal workplace cultures and create seismic shifts by making deceptively small changes.

By implementing sweeping changes, businesses often think it’s possible to do better, to earn more, and have happier employees. So why does engagement prove so difficult and productivity so elusive?

In Beyond Measure, Margaret Heffernan looks back over her decades spent overseeing different organizations and comes to a counterintuitive conclusion: it’s the small shifts that have the greatest impact. Heffernan argues that building the strongest organization can be accelerated by implementing seemingly small changes, such as embracing conflict as a creative catalyst; using every mind on the team; celebrating mistakes; speaking up and listening more; and encouraging time off from work.

Packed with incredible anecdotes and startling statistics, Beyond Measure takes us on a fascinating tour across the globe, highlighting disparate businesses and revealing how they’ve managed to change themselves in big ways through incremental shifts. How did the CIA revolutionize their intelligence gathering with one simple question? How did one organization increase their revenue by $15 million by instituting a short coffee break? How can a day-long hackathon change the culture of a company? Told with wry wit and knowing humor, Heffernan proves that it’s often the small changes that make the greatest, most lasting impact.
Margaret Heffernan is an entrepreneur, chief executive, and author. She was born in Texas, raised in Holland, and educated at Cambridge University. She worked for the BBC and developed interactive multimedia products with Peter Lynch, Tom Peters, Standard & Poors, and The Learning Company. She has served as Chief Executive Officer for InfoMation Corporation, ZineZone Corporation, and iCAST Corporation. The author of Beyond Measure, Willful Blindness, and A Bigger Prize, among others, she blogs for HuffPost, CBS Moneywatch, and Inc.com.