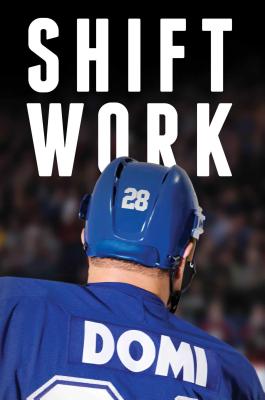 By Tie Domi, Jim Lang (With)
Please email or write store for pricing and availability information.
Hard to Find

From hockey’s most prolific fighter comes a sports memoir unlike any other—passionate, funny, and candid, Shift Work chronicles Domi’s sixteen tumultuous seasons in the NHL.

Making it through a single fight as an enforcer in the NHL is a sign of toughness. Making it through 333 of them is a mark of greatness. Whether it was on the ice or off it, Tie Domi was driven to be the best at his job and was gifted with an extraordinary ability to withstand pain. He made a career out of protecting the people around him and became known as someone who would stand up for the people who needed it most.

Raised by immigrant parents in Belle River, Domi found success from an early age on the field and the rink. A gifted athlete in whatever sport he played, Tie eventually focused his sights on hockey. As he moved up the junior ranks, he made a name for himself as a player who was always ready to take on anyone who dared to cross his teammates.

Tie’s reputation followed him into the NHL, and it wasn’t long before he ranked among the game’s most feared—and fearless—enforcers. From New York to Winnipeg to Toronto, Tie quickly became a fan favourite in whatever city he played. As he went about working his name into the record books, Tie surrounded himself with people from every walk of life, learning from each one as he evolved into a respected leader who was never afraid to tell it like it was.

In Shift Work, Tie recounts the ups and downs of his life on and off the ice, showing what he has learned and how he has grown as both a player and a person. He offers insight into the most memorable points of his career, sharing his successes and mistakes with unparalleled honesty. Shift Work shows Tie Domi as he is—a devoted father and friend, a valued and loyal team player, a magnetic personality, and an athlete of immense skill and courage.

Tie Domi was raised in Belle River, Ontario. Over his sixteen-year NHL career, he played for the New York Rangers, the Winnipeg Jets, and the Toronto Maple Leafs, where he was and still is a beloved fan favourite. With 333 career NHL fights, Domi has the most fights in NHL history.  Now a consultant, Domi is also active in many charitable foundations. He is the proud father of Carlin, Max, and Avery. Domi splits his time between Toronto and New York City, where he spends time with his girlfriend, Heather.

Jim Lang is a Canadian sportscaster, journalist, and the co-author of Shift Work and Bleeding Blue, two bestselling memoirs by Tie Domi and Wendel Clark. He hosts The Jim Lang Show. He lives outside Toronto with his wife and kids. Follow him on Twitter @JimLangSports.

“Shift Work is more than just a sports book. Tie tells about his personal and professional life, from being a young boy to the present. The book is a winner, just like Tie.”
— Don Cherry

“Tie is a loyal friend who is one of a kind on and off the ice. The best teammate I never had.”
— Mario Lemieux

“Without Tie at my side, I couldn’t have accomplished what I did in Toronto.”
— Mats Sundin

"Tie and I have many things in common - first and most obvious being our extremely large head sizes. But what is most endearing and special about Tie is the size of his heart, his sense of humor, and his amazing generosity. I love him like a brother. My four beautiful children all refer to him as Uncle Pumpkin - see if you can figure out why! "
— Mark Wahlberg

“I loved Shift Work. It is a must read for anyone who is passionate about hockey, as I am. But what makes the book particularly memorable is the telling of Tie’s remarkable life both on and off the ice. He is a real and inspiring champ at everything he does. I am very proud to call Tie my friend.”
— Nelson Peltz

“With Tie, what you see is what you get. And there is a world shortage of that, in every respect. Tie is the baseline for ‘real,’ and he is ‘old school.’”
— Mitch Goldhar

"I learned something about Tie when we were both young and playing for the Rangers and it is still true to this day: there’s no challenge he isn’t willing to take on. I’m talking about life, business, you name it. He takes on all of his challenges head on.”
— Adam Graves

"Tie Domi was always driven at what he did. People that are driven at certain things – and I only saw the hockey side – you know it is going to translate off the ice. It just has to; it is part of their DNA and part of their character...Tie would be a really good example of that."
— Glenn Healy

“Shift Work is a story of true grit and is sure to inspire people who have followed Tie’s career on and off the ice. Throughout our long friendship, I've seen firsthand Tie's dedication to family, loyalty to friends, and humility and generous spirit towards his many fans.”
— Mark Silver

“Tie Domi is one of the most loyal friends that you could ever ask to be a part of your life. I really got to know Tie when I coached his son, Max, who played with my son, Eric. Most people see Tie as the best protector of the stars he played with. I see him as a man who has a bigger heart than his head – a man who will always be there for all his friends. With all that said, his greatest asset is his family. I have been around many people, but nobody loves their children the way Tie loves Carlin, Avery, and Max. He is the best family man I have ever met. I love Tie Domi.”
— Bill Comrie

“There is more to Domi than a flurry of fists…When it comes to Tie Domi, there’s never a dull moment.”
— Globe and Mail