Etta and Otto and Russell and James: A Novel (Paperback) 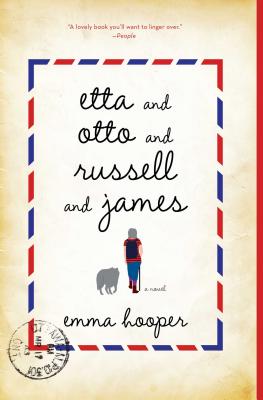 Etta and Otto and Russell and James: A Novel (Paperback)

“Eighty-three-year-old Etta Vogel quietly sets out one day to walk 3,200 kilometers to the coast of Canada for her first view of the ocean. As Etta travels, author Hooper gently and poignantly reveals a lifetime of morally charged events that shaped Etta as well as her husband, Otto, and her lifelong friend, Russell. This is a beautiful and sometimes hauntingly stark portrait of three WWII-generation lives, sprinkled with the wise counsel of a loyal coyote named James. I loved it!”
— Susan Tyler, The Book Bin, Onley, VA

This is an unusual book, and an incredible debut. The story bounces around in time and place over 65 or more years, from one era to another. It's a story of being who you want to be, what you want to experience, and how we love each other. There is a element of magic to the story, especially for James, that makes this seem like a fairy tale of quiet beauty and truths. I really can only say that this book is amazing and unforgettable and should be read immediately." ~ Jackie

Eighty-three-year-old Etta has never seen the ocean. So early one morning she takes a rifle, some chocolate, and her best boots and begins walking the 3,232 kilometers from rural Saskatchewan, Canada eastward to the sea. As Etta walks further toward the crashing waves, the lines among memory, illusion, and reality blur.

Otto wakes to a note left on the kitchen table. “I will try to remember to come back,” Etta writes to her husband. Otto has seen the ocean, having crossed the Atlantic years ago to fight in a far-away war. He understands. But with Etta gone, the memories come crowding in and Otto struggles to keep them at bay. Meanwhile, their neighbor Russell has spent his whole life trying to keep up with Otto and loving Etta from afar. Russell insists on finding Etta, wherever she’s gone. Leaving his own farm will be the first act of defiance in his life.

Moving from the hot and dry present of a quiet Canadian farm to a dusty, burnt past of hunger, war, and passion, from trying to remember to trying to forget, Etta and Otto and Russell and James is an astounding literary debut “of deep longing, for reinvention and self-discovery, as well as for the past and for love and for the boundless unknown” (San Francisco Chronicle). “In this haunting debut, set in a starkly beautiful landscape, Hooper delineates the stories of Etta and the men she loved (Otto and Russell) as they intertwine through youth and wartime and into old age. It’s a lovely book you’ll want to linger over” (People).
Raised in Alberta, Canada, Emma Hooper brought her love of music and literature to the UK, where she received a doctorate in Musico-Literary studies at the University of East-Anglia and currently lectures at Bath Spa University. A musician, Emma performs as the solo artist Waitress for the Bees and plays with a number of bands. She lives in Bath, UK, but goes home to Canada to cross-country ski whenever she can. She is the author of Etta and Otto and Russell and James and Our Homesick Songs.
“Etta and Otto and Russell and James is incredibly moving, beautifully written and luminous with wisdom. It is a book that restores one's faith in life even as it deepens its mystery. Wonderful!” —Chris Cleave, #1 New York Times Bestselling author of Little Bee

“The pages do turn quickly in this book...in Etta and Otto and Russell and James — a first novel by Emma Hooper — you're very interested in the characters. And you want to find out more about them. So as you turn the pages, you delve deeper into their hopes and where they are at the moment in their life. So it's a much different page-turner in a sense, but this is a lovely, lovely book.”

“Quirky, offbeat... Modern life is full of people spouting rubbish about spurious emotional and spiritual ‘journeys.’ Etta’s trek as she comes to the end of her life and reckons with the past, has, in contrast, a real and worthwhile dignity to it.”

“In this haunting debut, set in a starkly beautiful landscape, Hooper delineates the stories of Etta and the men she loved (Otto and Russell) as they intertwine through youth and wartime and into old age. It’s a lovely book you’ll want to linger over.”
—People

“Heartfelt… In simple, graceful prose, Hooper has woven a tale of deep longing, for reinvention and self-discovery, as well as for the past and for love and for the boundless unknown.”
—San Francisco Chronicle

“[Hooper’s] crisp, unadorned prose beautifully captures her characters' sentiments, and conveys with compassion but also a degree of distance their experiences of love and pain, longing and loss… this novel pulsates with an energy that can best be described as raw but also highly restrained. “
—Chicago Tribune

“Hooper has conjured a character who is a gift… As the lines blur between Etta’s and Otto’s memories, and even between their physical bodies, readers emerge with a deeper appreciation for life and for its suffering against its backdrop of majesty.”

“A bit like a fairy tale, Etta and Otto and Russell and James is whimsical, even magical. A bit like the Canadian prairie, it is spare, yet beautiful.”

“Fictional journeys toward enlightenment and self-discovery fill miles of book shelves, but few are as freshly told as the road trip traced in Etta and Otto and Russell and James…It’s filled with magical realism, whimsy and the idea that you’re never too old to take risks.”

"Hooper’s spare, evocative prose dips in and out of reality and travels between past and present creating what Etta tells Otto is “just a long loop.” This is a quietly powerful story whose dreamlike quality lingers long after the last page is turned."
—Library Journal (starred review)

"Hooper, with great insight, explores the interactions and connections between spouses and friends—the rivalries, the camaraderie, the joys and tragedies—and reveals the extraordinary lengths to which people will go in the name of love."
—Publishers Weekly (starred review)

"Drawing on wisdom and whimsy of astonishing grace and maturity, Hooper has written an irresistibly enchanting debut novel that explores mysteries of love old and new, the loyalty of animals and dependency of humans, the horrors of war and perils of loneliness, and the tenacity of time and fragility of memory."
—Booklist (starred review)