The Gene: An Intimate History (Hardcover) 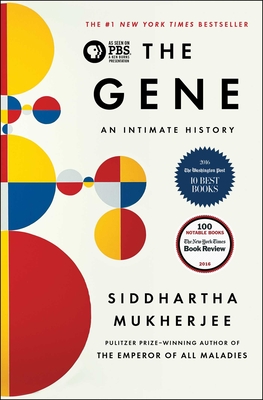 The Gene: An Intimate History (Hardcover)


Available to Order - Usually Arrives in Our Store in 4 to 7 Days
The #1 NEW YORK TIMES Bestseller
The basis for the PBS Ken Burns Documentary The Gene: An Intimate History

From the Pulitzer Prize–winning author of The Emperor of All Maladies—a fascinating history of the gene and “a magisterial account of how human minds have laboriously, ingeniously picked apart what makes us tick” (Elle).

"Sid Mukherjee has the uncanny ability to bring together science, history, and the future in a way that is understandable and riveting, guiding us through both time and the mystery of life itself." –Ken Burns

“Dr. Siddhartha Mukherjee dazzled readers with his Pulitzer Prize-winning The Emperor of All Maladies in 2010. That achievement was evidently just a warm-up for his virtuoso performance in The Gene: An Intimate History, in which he braids science, history, and memoir into an epic with all the range and biblical thunder of Paradise Lost” (The New York Times). In this biography Mukherjee brings to life the quest to understand human heredity and its surprising influence on our lives, personalities, identities, fates, and choices.

“Mukherjee expresses abstract intellectual ideas through emotional stories…[and] swaddles his medical rigor with rhapsodic tenderness, surprising vulnerability, and occasional flashes of pure poetry” (The Washington Post). Throughout, the story of Mukherjee’s own family—with its tragic and bewildering history of mental illness—reminds us of the questions that hang over our ability to translate the science of genetics from the laboratory to the real world. In riveting and dramatic prose, he describes the centuries of research and experimentation—from Aristotle and Pythagoras to Mendel and Darwin, from Boveri and Morgan to Crick, Watson and Franklin, all the way through the revolutionary twenty-first century innovators who mapped the human genome.

“A fascinating and often sobering history of how humans came to understand the roles of genes in making us who we are—and what our manipulation of those genes might mean for our future” (Milwaukee Journal-Sentinel), The Gene is the revelatory and magisterial history of a scientific idea coming to life, the most crucial science of our time, intimately explained by a master. “The Gene is a book we all should read” (USA TODAY).
Siddhartha Mukherjee is the author of The Gene: An Intimate History, a #1 New York Times bestseller; The Emperor of All Maladies: A Biography of Cancer, winner of the 2011 Pulitzer Prize in general nonfiction; and The Laws of Medicine. He is the editor of Best Science Writing 2013. Mukherjee is an associate professor of medicine at Columbia University and a cancer physician and researcher. A Rhodes scholar, he graduated from Stanford University, University of Oxford, and Harvard Medical School. He has published articles in many journals, including Nature, The New England Journal of Medicine, Cell, The New York Times Magazine, and The New Yorker. He lives in New York with his wife and daughters. Visit his website at: SiddharthaMukherjee.com.

"This is perhaps the greatest detective story ever told—a millennia-long search, led by a thousand explorers, from Aristotle to Mendel to Francis Collins, for the question marks at the center of every living cell. Like The Emperor of All Maladies, The Gene is prodigious, sweeping, and ultimately transcendent. If you’re interested in what it means to be human, today and in the tomorrows to come, you must read this book."
— Anthony Doerr, author of All the Light We Cannot See

"The Gene is a magnificent synthesis of the science of life, and forces all to confront the essence of that science as well as the ethical and philosophical challenges to our conception of what constitutes being human."
— Paul Berg, winner of the Nobel Prize in Chemistry

“Sobering, humbling, and extraordinarily rich reading from a wise and gifted writer who sees how far we have come—but how much farther far we have to go to understand our human nature and destiny.”
— Kirkus, starred review

"Mukherjee deftly relates the basic scientific facts about the way genes are believed to function, while making clear the aspects of genetics that remain unknown. He offers insight into both the scientific process and the sociology of science... By relating familial information, Mukherjee grounds the abstract in the personal to add power and poignancy to his excellent narrative."
— Publishers Weekly, starred review

“A magisterial account of how human minds have laboriously, ingeniously picked apart what makes us tick. . . . [The Gene] will confirm [Mukherjee] as our era’s preeminent popular historian of medicine. The Gene boats an even more ambitious sweep of human endeavor than its predecessor. . . . Mukherjee punctuates his encyclopedic investigations of collective and individual heritability, and our closing in on the genetic technologies that will transform how we will shape our own genome, with evocative personal anecdotes, deft literary allusions, wonderfully apt metaphors, and an irrepressible intellectual brio.”
— Ben Dickinson, Elle

“Magnificent…. The story [of the gene] has been told, piecemeal, in different ways, but never before with the scope and grandeur that Siddhartha Mukherjee brings to his new history… he views his subject panoptically, from a great and clarifying height, yet also intimately.”
— James Gleick, New York Times Book Review

“Many of the same qualities that made The Emperor of All Maladies so pleasurable are in full bloom in The Gene. The book is compassionate, tautly synthesized, packed with unfamiliar details about familiar people.”
— Jennifer Senior, The New York Times

“Mukherjee’s visceral and thought-provoking descriptions... clearly show what he is capable of, both as a writer and as a thinker.”
— Matthew Cobb, Nature

“His topic is compelling. . . . And it couldn’t have come at a better time.”
— Courtney Humphries, Boston Globe

"[Mukherjee] nourishes his dry topics into engaging reading, expresses abstract intellectual ideas through emotional stories . . . .[and] swaddles his medical rigor with rhapsodic tenderness, surprising vulnerability, and occasional flashes of pure poetry. . . . . With a marriage of architectural precision and luscious narrative, an eye for both the paradoxical detail and the unsettling irony, and a genius for locating the emotional truths buried in chemical abstractions, Mukherjee leaves you feeling as though you've just aced a college course for which you'd been afraid to register -- and enjoyed every minute of it."
— Andrew Solomon, Washington Post

“The Gene is equally authoritative [to Emperor], building on extensive research and erudition, and examining the Gordian knots of genes through the prism of his own family’s struggle with a disease. He renders complex science with a novelist’s skill for conjuring real lives, seismic events.”
— Hamilton Cain, Minneapolis Star Tribune

“A fascinating and often sobering history of how humans came to understand the roles of genes in making us who we are—and what our manipulation of those genes might mean for our future. . . . The Gene captures the scientific method—questioning, researching, hypothesizing, experimenting, analyzing—in all its messy, fumbling glory, corkscrewing its way to deeper understanding and new questions.”
— Jim Higgins, Milwaukee Journal-Sentinel

“Reading The Gene is like taking a course from a brilliant and passionate professor who is just sure he can make you understand what he’s talking about. . . . The Gene is excellent preparation for all the quandaries to come.”
— Mary Ann Gwinn, Seattle Times

“Inspiring and tremendously evocative reading. . . . Like its predecessor, [The Gene] is both expansive and accessible . . . . In The Gene, Mukherjee spends most of his time looking into the past, and what he finds is consistently intriguing. But his sober warning about the future might be the book’s most important contribution.”
— Kevin Canfield, San Francisco Chronicle

“Destined to soar into the firmament of the year’s must reads, to win accolades and well-deserved prizes, and to set a new standard for lyrical science writing. . . . Dr. Siddhartha Mukherjee dazzled readers with his Pulitzer-winning The Emperor of All Maladies in 2010. That achievement was evidently just a warm-up for his virtuoso performance in The Gene: An Intimate History, in which he braids science, history, and memoir into an epic with all the range and biblical thunder of Paradise Lost. . . . Thanks to Dr. Mukherjee’s remarkably clear and compelling prose, the reader has a fighting chance of arriving at the story of today’s genetic manipulations with an actual understanding of both the immensely complicated science and the even more complicated moral questions.”
— Abigail Zuger, New York Times Science Section

“[The Emperor of All Maladies and The Gene] both beautifully navigate a sea of complicated medical information in a way that is digestible, poignant, and engaging . . . . [The Gene] is a book we all should read. I shook my head countless times while devouring it, wondering how the author—a brilliant physician, scientist, writer, and Rhodes Scholar—could possibly possess so many unique talents. When I closed the book for the final time, I had the answer: Must be in the genes.”
— Matt McCarthy, USA Today

“A brilliant exploration of some of our age’s most important social issues, from poverty to mental illness to the death penalty, and a beautiful, profound meditation on the truly human forces that drive them. It is disturbing, insightful, and mesmerizing in equal measure.”
— Coastal Current

“Dr Mukherjee uses personal experience to particularly good effect. . . . Perhaps the most powerful lesson of Dr Mukherjee’s book [is]: genetics is starting to reveal how much the human race has to gain from tinkering with its genome, but still has precious little to say about how much we might lose.”
— The Economist

“As compelling and revealing as [The Emperor of All Maladies]. . . . On one level, The Gene is a comprehensive compendium of well-told stories with a human touch. But at a deeper level, the book is far more than a simple science history.”
— Fred Bortz, Dalls Morning News

“Mukherjee is an assured, polished wordsmith . . . who displays a penchant for the odd adroit aphorism and well-placed pun. . . . A well-written, accessible, and entertaining account of one of the most important of all scientific revolutions, one that is destined to have a fundamental impact on the lives of generations to come. The Gene is an important guide to that future.”
— Robin McKie, The Guardian