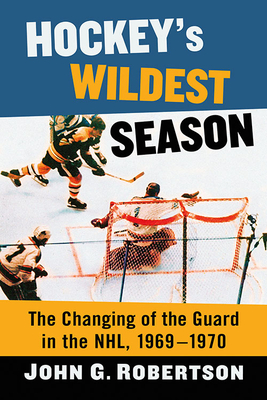 By John G. Robertson
Please email or write store for pricing and availability information.
Available to Order - Usually Arrives in Our Store in 4 to 7 Days

The 1969-70 season marked a turning point in the history of the National Hockey League. The season began with a near fatality and it culminated on a steamy Sunday afternoon in Boston with one of the NHL's most iconic moments. In the interim, the 12 NHL clubs staged thrilling and memorable playoff races that were not decided until the final regular-season games were played. The three traditional powerhouse teams from the Original Six era faltered while former underdog clubs began to vie for top honors. Along the way, Boston's Bobby Orr made history by becoming the first defenseman to win the NHL scoring title, three aging veterans in Detroit combined to form the most effective forward line in hockey, and a rookie goalie, Tony Esposito, lifted the Chicago Black Hawks from the basement to a divisional championship. Told here are the numerous other wonderful, strange, and captivating incidents that made the fun, fascinating, and free-wheeling 53rd NHL season one for the ages.

John G. Robertson is a private tutor and sports historian who lives in Cambridge, Ontario. He is also the author of several books on baseball history.