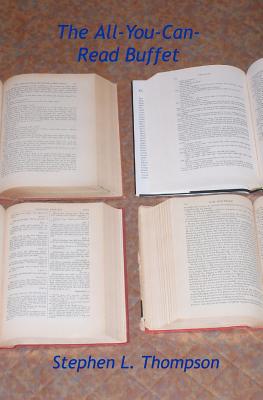 
Available to Order - Usually Arrives in Our Store in 4 to 7 Days
The All-You-Can-Read Buffet is a collection of forty stories covering various genres and themes ranging from six to over 4,200 words in length. They also cover a wide time range. Some of these stories I began writing a decade ago, while others were written especially for this collection. All together, they are a buffet of my writing. As such, I encourage you to read as much as you want. Go back for seconds, thirds, fourths even. I won't even mind if you skip over the stuff you don't like, but, to quote your mother, "How do you know you don't like it? Have you tried it?"
Book excerpt - story "Dark Anniversary"
With a dozen roses in hand, the man dressed all in black walked towards the tombstone. The lettering had already begun to fade, but the words were drilled into his brain: Edith Robyn Sommers, April 4, 1956 - June 14, 1975.
After a few moments of reflection, the man knelt and set the roses on her grave.
"You are so maudlin, Eric," a voice said from the darkness.
Without turning, Eric said, "You never forget your first, Robert."
Robert stepped from the shadows. "My first was just some peasant."
"And after all these centuries you still remember that."
Robert stood for a few seconds, then turned and disappeared.
Eric chuckled, then stood. He nodded to the tombstone and said, "Until next year, Edith." He then spread his wings and flew into the night.
Stephen L. Thompson lives, as he likes to say, a short drive from the middle of nowhere in Northwestern Pennsylvania. He spends his days dreaming of other worlds and trying to write down what he sees.