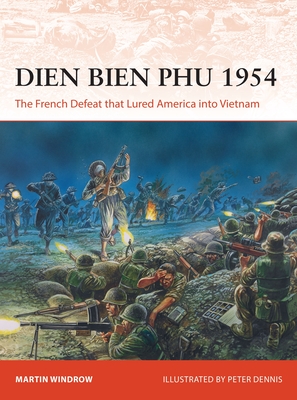 A highly illustrated study of the battle at Dien Bien Phu, the 56-day siege that eventually led to the surrender of the remaining French-led forces, this iconic battle provided the climax of the First Indochina War.

In late 1953, the seventh year of France's war against the Viet Minh insurgency in its colony of Vietnam, the C-in-C, General Navarre, was encouraged to plant an 'air-ground base' in the Thai Highlands at Dien Bien Phu, to distract General Giap's Vietnamese People's Army from both Annam and the French northern heartland in the Red River Delta, and to protect the Laotian border. Elite French paratroopers captured Dien Bien Phu, which was reinforced between December 1953 and February 1954 with infantry and artillery, a squadron of tanks and one of fighter-bombers, to a strength of 10,000 men. Giap and the VPA General Staff accepted the challenge of a major positional battle; through a total mobilization of national resources, and with Chinese logistical help, they assembled a siege army of 58,000 regular troops, equipped for the first time with 105mm artillery and 37mm AA guns. Here, author Martin Windrow describes how from their first assaults on 13 March 1954, the battle quickly developed into a dramatic 56-day 'Stalingrad in the jungle' that drew the attention of the world.

Martin Windrow is an English military historian and a long-time commissioning and art editor for Osprey Publishing. He is the author of numerous books of military history, including The Last Valley, a distinguished history of the French defeat in Vietnam. He lives in the Sussex Downs country of southern England.

Peter Dennis was inspired by contemporary magazines such as Look and Learn, leading him to study Illustration at Liverpool Art College. Peter has since contributed to hundreds of books, predominantly on historical subjects, including many Osprey titles. A keen wargamer and modelmaker, he is based in Nottinghamshire, UK.