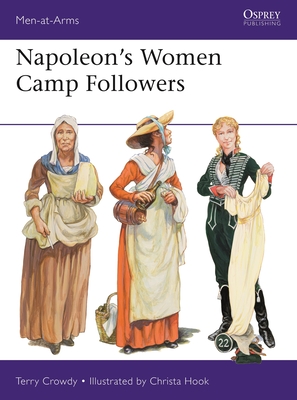 Researched from genuine primary sources in regulations and memoirs, this is the first book to explain and illustrate the organization, activities, and personal stories of the female "support staff" who played a major role in the day-to-day life of Napoleon's armies.

The cantinières who accompanied Napoleon's armies to war have an iconic status in the history of the Grande Armée. Sutler-women and laundresses were officially sanctioned members of the regiment performing a vital support role. In a period when the supply and pay services were haphazard, their canteen wagons and tents were a vital source of sustenance and served as the social hubs of the regiment.
Although officially non-combatants, many of these women followed their regiments into battle, serving brandy to soldiers in the firing line, braving enemy fire.
This book is a timely piece of social history, as well as a colorful new guide for modelers and re-enactors. Through meticulous research of unprecedented depth and accuracy, Terry Crowdy dispels the inaccurate portrayals that Napoleon's Women Camp Followers have suffered over the years to offer a fascinating look at these forgotten heroines.

TERRY CROWDY is a British military history author specializing in the Napoleonic Wars and the history of espionage. He has written extensively on French Revolutionary and Napoleonic infantry, with a particular focus on daily life in barracks and on campaign. His works include a history of the 'Incomparable' 9th Light Infantry Regiment, and a study of the Battle of Marengo. He is a Fellow of the International Napoleonic Society and a Member of the Society of Authors.

CHRISTA HOOK began her illustrating career in 1986, after studying under her father Richard Hook. Her work has featured extensively in the worlds of publishing and television. She has established herself as one of Osprey's most popular artists, having illustrated multiple series titles. Her illustrations combine the historian's attention to detail with the artist's sense of drama and atmosphere, and they are sought after by collectors worldwide. Christa lives and works in East Sussex, England.