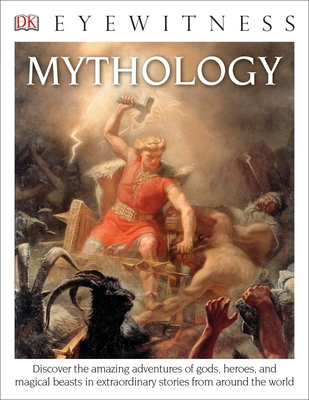 A visual and informative guide to the myths of world civilizations.

Get up close and personal and be an eyewitness to the mythological stories of cultures throughout the world.

Whether it's the creation of the world, the fertility of the land, or a history of its people, each culture has its own mythology: a collection of stories that explain the world as it relates to them and that has been passed down through the generations. From heroes and villains to gods and tricksters to floods and the end of the world, discover the myths of the Norse, Greek, Hindu, Inuit, Egyptian, Chinese, Japanese, Native American, and other cultures.

DK Eyewitness Books: Mythology is a visual and informative guide to the stories that prove a central part of the world's peoples.

Series Overview: On every colorful page: vibrant annotated photographs and the integrated text-and-pictures approach that makes Eyewitness a perennial favorite of parents, teachers, and school-age kids.

DK was founded in London in 1974 and is now the world's leading illustrated reference publisher and part of Penguin Random House, formed on July 1, 2013. DK publishes highly visual, photographic nonfiction for adults and children. DK produces content for consumers in over 87 countries and in 62 languages, with offices in Delhi, London, Melbourne, Munich, New York, and Toronto. DK's aim is to inform, enrich, and entertain readers of all ages, and everything DK publishes, whether print or digital, embodies the unique DK design approach. DK brings unrivalled clarity to a wide range of topics with a unique combination of words and pictures, put together to spectacular effect. We have a reputation for innovation in design for both print and digital products.   Our adult range spans travel, including the award-winning DK Eyewitness Travel Guides, history, science, nature, sport, gardening, cookery, and parenting. DK’s extensive children’s list showcases a fantastic store of information for children, toddlers, and babies. DK covers everything from animals and the human body, to homework help and craft activities, together with an impressive list of licensing titles, including the bestselling LEGO® books. DK acts as the parent company for Alpha Books, publisher of the Idiot's Guides series and Prima Games, video gaming publishers, as well as the award-winning travel publisher, Rough Guides.

Past praise for the DK Eyewitness Books series:

"The folks at DK have almost single-handedly rejuvenated if not reinvented the often moribund world of non-fiction books for children." — Newsweek

"A mini museum between the covers of a book." — The New York Times

"These books' striking visual impact will draw in even the most casual readers." — School Library Journal