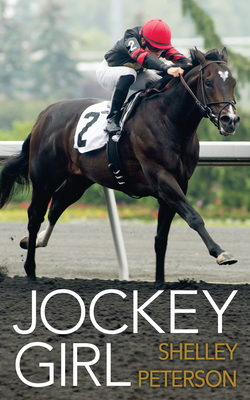 A teen girl's quest to find her mother leads her to the big city, and gives her the courage to fulfill her dream of becoming a jockey.

Evangeline "Evie" Gibb lives a seemingly charmed life on a thoroughbred racehorse farm. But in reality, Evie feels alone in the world, cheered only by the affection of a racehorse named No Justice.

She's always been told that her mother, Angela Parson, is dead. Then, on her sixteenth birthday, a card arrives from her great aunt Mary with the suggestion that Angela might still be alive -- and Evie's life is turned upside down. In hopes of winning enough money to leave her hateful father and find her mother, Evie enters the Caledon Horse Race. But something she overhears her father say changes everything, and Evie steals the racehorse in the night and runs away. With a stray dog named Magpie at her side and help from Aunt Mary, Evie unearths long-hidden family secrets, finds unexpected love, and takes the racing world by storm.
Shelley Peterson is the bestselling author of six published novels for young readers: Dancer, Abby Malone, Stagestruck, Sundancer, Mystery at Saddle Creek, and Dark Days at Saddle Creek. She divides her time between Toronto and Fox Ridge, where she operates a stable.