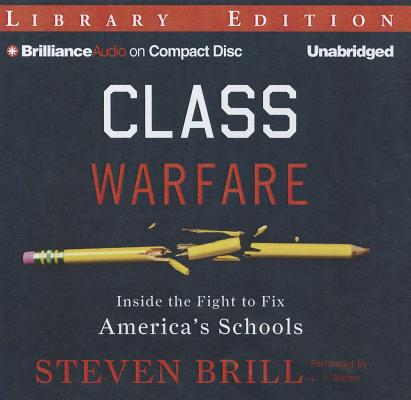 In a reporting tour de force, award-winning journalist Steven Brill takes an uncompromising look at the adults who are fighting over America's failure to educate its children--and points the way to reversing that failure.

Brill's vivid narrative--filled with unexpected twists and turns--takes us from the Oval Office, where President Obama signs off on an unprecedented plan that will infuriate the teachers' unions because it offers billions to states that win an education reform "contest"; to boisterous assemblies, where parents join the fight over their children's schools; to a Fifth Avenue apartment, where billionaires plan a secret fund to promote school reform; to a Colorado high school, where students who seemed destined to fail are instead propelled to college; to state capitols across the country, where school reformers hoping to win Obama's "contest" push bills that would have been unimaginable a few years ago.

It's the story of an unlikely army--fed-up public school parents, Ivy League idealists, hedge-funders, civil rights activists, conservative Republicans, insurgent Democrats--squaring off against unions that the reformers claim are protecting a system that works for the adults but victimizes the children.

Class Warfare is filled with extraordinary people taking extraordinary paths: a young woman who goes into teaching almost by accident, then becomes so talented and driven that fighting burnout becomes her biggest challenge; an antitrust lawyer who almost brought down Bill Gates's Microsoft and now forms a partnership with Bill and Melinda Gates to overhaul New York's schools; a na ve Princeton student who launches an army of school reformers with her senior thesis; a California teachers' union lobbyist who becomes the mayor of Los Angeles and then the union's prime antagonist; a stubborn young teacher who, as a child growing up on Park Avenue, had been assumed to be learning disabled but ends up co-founding the nation's most successful charter schools; and an anguished national union leader who walks a tightrope between compromising enough to save her union and giving in so much that her members will throw her out.

Brill not only takes us inside their roller-coaster battles, he also concludes with a surprising prescription for what it will take from both sides to put the American dream back in America's schools.