An Oral History of the New Orleans Ninth Ward (Hardcover) 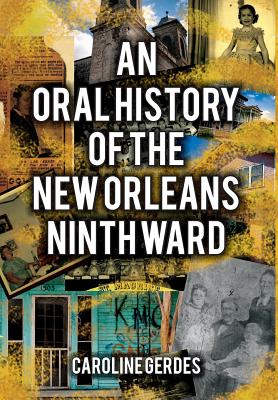 An Oral History of the New Orleans Ninth Ward (Hardcover)

Steeped in musical influence, racial dynamics, and culinary significance, the Ninth Ward has distinguished itself as one of New Orleans' most influential communities. Extensively researched and carefully recorded, this new oral record features unique interviews with generations of residents. Each source honestly evaluates discrimination, neighbors, poverty, and faith, delivering heartfelt and often harrowing insight into what it means to be from the Ninth Ward. Each chapter chronicles one of the metaphorical and actual storms the area has weathered and is seamlessly woven into a comprehensive record by people who know the Ninth Ward best.

A specialist in Ninth Ward history and a New Orleans native, Caroline Gerdes is a freelance journalist who frequently publishes in the Huffington Post and other national platforms. The Advocate (Baton Rouge, LA) and the New Orleans Times-Picayune have interviewed her as a regional oral historian, and she is also a Women's Media Center SheSource expert. Gerdes received a grant from the National Geographic Society to preserve the history of the Ninth Ward through an oral history project, which she has now adapted into this book.