Letters of Note: Volume 2: An Eclectic Collection of Correspondence Deserving of a Wider Audience (Hardcover) 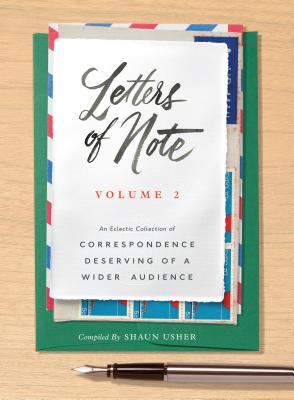 By Shaun Usher (Compiled by)
$40.00
Available to Order - Usually Arrives in Our Store in 4 to 7 Days

From the editor of the New York Times bestseller and instant classic Letters of Note, comes this companion volume of more than 125 captivating letters. Each turn of the page brings delight and discovery in a collection of correspondence that spans centuries and place, written by the famous, the not-so-famous, and the downright infamous. Entries are accompanied by a transcript of the letter, a short contextual introduction, and a spirited illustration—in most cases, a facsimile of the letter itself. A splendid gatefold features one extraordinary hand-embroidered biographical letter. As surprising as it is entertaining, Letters of Note: Volume 2 is a gift of endless enjoyment and lasting value.

Shaun Usher is the founder of the blog-based archives Letters of Note and Lists of Note, which have inspired books of the same name edited by him. He lives in the UK.

"This book is a serious bit of kit...if you don't find at least something that interests you in this book you are not a proper human being . (And unless you find almost all of it gripping I can't imagine having a conversation with you.)"
-Spectator

Holiday Gift Guide pick "Take a break from email and text messaging and dive into this impressive collection of letters instead. History lovers and bibliophiles alike will relish poring through 125 letters written by authors, scientists, celebrities, and ordinary people. Like it's 2014 predecessor, each entry includes a replica of the letter in its original form, a transcription (if necessary), and background information to provide context. Highlights include a British professor's cover letter to Albus Dumbledore, requesting to be considered for the position of Defense of the Dark Arts teacher at Hogwarts School of Witchcraft and Wizardry (and the kind rejection from J.K. Rowling, in character as Professor Dumbledore), a moving letter from Abraham Lincoln to a young girl whose father was killed in the Civil War, and David Bowie's response to his first piece of American fan mail. Relive history with your loved ones with this endlessly entertaining compilation."
-Real Simple

"The books in this series are always of the highest quality, both in content and in production and materials. These are the kinds of books that will live on your bookshelf for the rest of your life, and get passed down to your history- and culture-loving heirs. They are some of the most approachable ways to learn about history and culture, and really pull at your emotions, lifting your spirits, making you laugh, or creating a somber tone."
-GeekDad

"Books promise pleasure, too, as I've been reminded within the pages of "Letters of Note, Volume 2," a new follow-up to Shaun Usher's 2014 collection of wise, funny and poignant letters from around the world and throughout the ages."
-The Advocate

Starred Review"This follow up to 2014's collection offers newcomers and fans of the series another outstanding compendium of correspondence from celebrities, U.S. presidents, and ordinary citizens. Like its predecessor, each entry includes replicate of the letter in its original form next to a transcription of it content as well as contextual information. The breadth of the collection is impressive all sorts of correspondences, ranging from record producer Steve Albini's 1992 letter to the members of the band Nirvana about their upcoming collaboration on the In Utero album to Abraham Lincoln's 1862 touching letter to a young girl whose father was killed in the Civil War. The letters written by ordinary people are just as noteworthy: an educated slave's farewell letter to his wife after they were separated by after he was sold in 1858 and a soldier's firsthand account of the Christmas truce between British and German troops in 1914 are just some of the heartwrenching inclusions. Happily, there are just as many lighthearted entries as well: there's a University of Sussex professor's cheeky cover letter for the Defence Against the Dark Arts teaching post at Hogwarts, Ayn Rand's 1966 letter to the editor of Cat Fancy magazine, and an illustrated story Beatrix Potter sent to the five-year-old son of her friend and former governess. This fantastic collection of over 125 letters is endlessly entertaining."
-Publishers Weekly

"Funny, shocking and poignant, More Letters of Note must be one of the most entertaining books of the year."
-Financial Times (UK)

"Beautifully designed and best dipped into, it is engaging, eclectic, and geekily and gleefully enthusiastic. First class."
-Sunday Times (UK)

"Nothing, the book suggests (and proves), can give us such instant, vivid and intimate glimpses into such a wide range of emotions as letters do. On virtually every page, we're plunged deep into the heart of the writer, whether joyfully, painfully or, quite often, disconcertingly"
-The Daily Mail Online (UK)