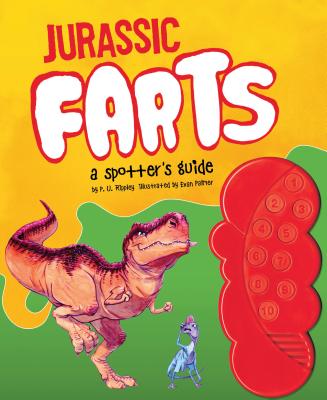 
Email or call for price. Handling fee may apply.
In prehistoric times, majestic dinosaurs walked the earth. Though long extinct, one important question remains—did dinosaurs fart? You bet! From booming Brachiosaurus to the terrible tooting T. Rex, this amusing handbook not only includes stats on the funniest dinosaur farts but also the sound effects that go with them. Just push the button on the battery-powered fart machine and let 'er rip!
P. U. Rippley has been named Fartsperson of the Year five times by the Royal Fartological Society and has been called as an expert witness (on farts) by jurisdictions all over the world. He lives in an undisclosed location with his trained box turtle, Donald.

Evan Palmer works by day as a digital media producer of interactive and animated content at PUNY. By night, he is a cartoonist and illustrator who creates and publishes his own original comics about wizards, robots, and cooking. He lives in Minneapolis, Minnesota.