This Changes Everything: Capitalism vs. The Climate (Paperback) 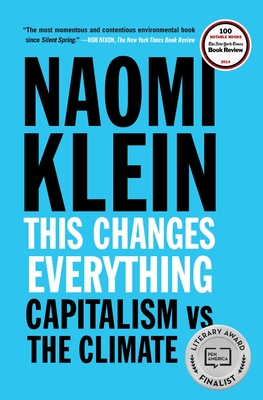 This Changes Everything: Capitalism vs. The Climate (Paperback)

— Lynn is our used book buyer at TC, one of the many tasks she has performed over the decades
The most important book yet from the author of the international bestseller The Shock Doctrine, a brilliant explanation of why the climate crisis challenges us to abandon the core “free market” ideology of our time, restructure the global economy, and remake our political systems.

Can we pull off these changes in time? Nothing is certain. Nothing except that climate change changes everything. And for a very brief time, the nature of that change is still up to us.
Naomi Klein is an award-winning journalist, columnist, and author of the New York Times and international bestsellers The Shock Doctrine, No Logo, This Changes Everything, and No Is Not Enough. A Senior Correspondent for The Intercept, reporter for Rolling Stone, and contributor for both The Nation and The Guardian, Klein is the inaugural Gloria Steinem Endowed Chair in Media, Culture, and Feminist Studies at Rutgers University. She is cofounder of the climate justice organization The Leap.

“This may be the first truly honest book ever written about climate change.”
— Bryan Walsh

"The most momentous and contentious environmental book since Silent Spring.”
— Rob Nixon

"This is the best book about climate change in a very long time—in large part because it's about much more. It sets the most important crisis in human history in the context of our other ongoing traumas, reminding us just how much the powers-that-be depend on the power of coal, gas and oil. And that in turn should give us hope, because it means the fight for a just world is the same as the fight for a livable one."
— Bill McKibben, author of The End of Nature and co-founder of 350.org

“This Changes Everything is the work book for . . . [a] new, more assertive, more powerful environmental movement.”
— Mark Bittman

"Naomi Klein applies her fine, fierce, and meticulous mind to the greatest, most urgent questions of our times. . . . I count her among the most inspirational political thinkers in the world today."
— Arundhati Roy, author of The God of Small Things and Capitalism: A Ghost Story

“Naomi Klein is a genius. She has done for politics what Jared Diamond did for the study of human history. She skillfully blends politics, economics and history and distills out simple and powerful truths with universal applicability.”
— Robert F. Kennedy, Jr.

“[A]robust new polemic. . . . Drawing on an impressive volume of research, Ms. Klein savages the idea that we will be saved by new technologies or by an incremental shift away from fossil fuels: Both approaches, she argues, are forms of denial. . . . Ms. Klein is aware of the intractability of the problems she describes, but she manages optimism nonetheless.”
— Nathaniel Rich

"Klein is a brave and passionate writer who always deserves to be heard, and this is a powerful and urgent book."
— John Gray

“If global warming is a worldwide wake-up call, we’re all pretty heavy sleepers. . . . We haven't made significant progress, Klein argues, because we've been expecting solutions from the very same institutions that created the problem in the first place. . . . Klein's sharp analysis makes a compelling case that a mass awakening is part of the answer.”
— Chris Bentley

“Gripping and dramatic. . . . [Klein] writes of a decisive battle for the fate of the earth in which we either take back control of the planet from the capitalists who are destroying it or watch it all burn.”
— Roy Scranton

“Naomi Klein’s latest book may be the manifesto that the climate movement — and the planet — needs right now. . . . For those with whom her message does resonate — and they are likely to be legion — her book could help catalyze the kind of mass movement she argues the world needs now.”
— Mason Inman

“Powerfully and uncompromisingly written, the impassioned polemic we have come to expect from Klein, mixing first-hand accounts of events around the world and withering political analysis. . . . Her stirring vision is nothing less than a political, economic, social, cultural and moral make-over of the human world.”
— Mike Hulme

“Klein is one of the left’s most influential figures and a prominent climate champion. . . . [She] is a gifted writer and there is little doubt about the problem she identifies.”
— Pilita Clark