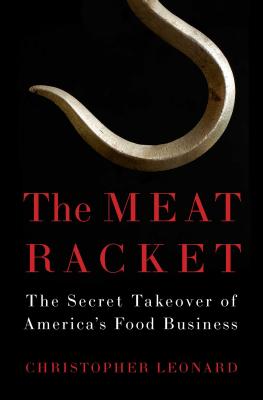 By Christopher Leonard
$28.00
Hard to Find

An investigative journalist takes you inside the corporate meat industry—a shocking, in-depth report every American should read.

The American supermarket seems to represent the best in America: abundance, freedom, choice. But that turns out to be an illusion. The rotisserie chicken, the pepperoni, the cordon bleu, the frozen pot pie, and the bacon virtually all come from four companies.

In The Meat Racket, investigative reporter Christopher Leonard delivers the first-ever account of how a handful of companies have seized the nation’s meat supply. He shows how they built a system that puts farmers on the edge of bankruptcy, charges high prices to consumers, and returns the industry to the shape it had in the 1900s before the meat monopolists were broken up. At the dawn of the twenty-first century, the greatest capitalist country in the world has an oligarchy controlling much of the food we eat and a high-tech sharecropping system to make that possible.

Forty years ago, more than thirty-six companies produced half of all the chicken Americans ate. Now there are only three that make that amount, and they control every aspect of the process, from the egg to the chicken to the chicken nugget. These companies are even able to raise meat prices for consumers while pushing down the price they pay to farmers. And tragically, big business and politics have derailed efforts to change the system.

We know that it takes big companies to bring meat to the American table. What The Meat Racket shows is that this industrial system is rigged against all of us. In that sense, Leonard has exposed our heartland’s biggest scandal.

Christopher Leonard is a business reporter whose work has appeared in The Washington Post, The Wall Street Journal, Fortune, and Bloomberg Businessweek. He is the critically acclaimed author of the New York Times bestseller Kochland, which won the J. Anthony Lukas Work-in-Progress Award, and The Meat Racket.

“Brilliant…a book that at times burns slow and hot with outrage and at other times proceeds at the ecstatic pace of a thriller.”
— New York Times Book Review

"Only a very good writer could turn a story about chickens, hogs and cattle into a thriller, and Leonard is that. He brings his characters to life. . . . The book is a scary portrait of capitalism run amok."
— Bethany McLean, The Washington Post

"Gripping...The Meat Racket is a riveting book, and the picture Mr. Leonard paints is a disturbing one."
— Wall Street Journal

“Leonard’s book argues that a handful of companies, led by Tyson, control our meat industry in ways that raise concerns about the impact on animals and humans alike, while tearing at the fabric of rural America.”
— Nicholas Kristof, The New York Times

“One of the best books of investigative reporting that I’ve seen in quite a while…if you think muckraking is dead or even on its last legs, The Meat Racket is proof positive that it’s very much alive. The big question is whether or not there are any reformers and regulators left who have the will and the strength to pick up the ball and run with it.”
— Strategy + Business

“A fascinating look at what has happened in the past decades to the meat business as huge companies essentially staged a takeover while no one, except struggling farmers, paid mind.”
— New York Daily News

“An engrossing report on the industrialized American meat business…a richly detailed examination of factory farming, which has reshaped small-town life for the worse. . . . An authoritative look at a ruthlessly efficient system.”
— Kirkus Reviews (starred)

“A minor miracle of reporting. Tyson isn’t the sort of company that likes to show reporters around its operations…Leonard managed to penetrate that secrecy, and has painted an intimate picture of the company and the people who made it.”
— Grist

“In his eye-opener to the inner workings of the corporations that control and manipulate the nation’s meat supply, journalist Leonard reveals how these vertically integrated behemoths operate to the detriment of both farmers, who do the hard and risky work of raising animals, and consumers, who have actually fewer true choices when shopping in the grocery store or ordering at the local fast-food franchise.”
— Booklist

“Cruelty, greed, and monopoly power--that is what Christopher Leonard has found at the heart of America's meat packing industry. This book offers a devastating portrait of an industry's irresponsible behavior.”
— Eric Schlosser, author of Fast Food Nation

“Leonard’s primary concern is the grim and gripping story of how American meat went industrial. But he also spins a nuanced tale of how the family farm was America’s first small business—and what we’ve lost by letting it go. A fascinating read.”
— Tracie McMillan, author of The American Way of Eating

“A meticulous exposé of the meat industry . . . also telling a broader story about American business, consumerism, and—most of all—greed. . . . What makes The Meat Racket stand out is Leonard’s superb storytelling and his clear passion for the topic. . . . He is a man on a mission—and that is clearly the best kind of reporter to write a book like this.”
— Jessica Valenti

"Leonard, former national agribusiness reporter for The Associated Press, pulls off a stunning feat in putting the heat on the major industrial meat giants."
— Publishers Weekly

“This eye-opening investigation into the semi-shady practices governing one of the nation's fundamental industries will make readers question how these megacompanies were ever allowed to grow so large and powerful…. A compelling in-depth exposé of the concentration of wealth and power at the heart of the U.S. meat industry.”
— Shelf Awareness for Readers

“I will admit when I picked up this book, it was more with the sense that it was something I should read than something that would be a page turner. And yet it immediately drew me in. Christopher Leonard's power is the ability to capture the human lives caught within the system, particularly the farmers but also the employees who helped build the corporations… this book is a compelling reminder that we all have a stake in how this business is conducted.”
— Sarah J. Gardner