Class Warfare: Inside the Fight to Fix America's Schools (Paperback) 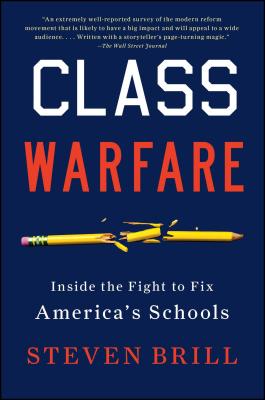 By Steven Brill
$18.00
Available to Order - Usually Arrives in Our Store in 4 to 7 Days

In a reporting tour de force that made national headlines and The New York Times bestseller list, award-winning journalist Steven Brill takes an uncompromising look at the adults who are fighting over America’s failure to educate its children—and points the way to reversing that failure.

In a reporting tour de force, award-winning journalist Steven Brill takes an uncompromising look at the adults who are fighting over America’s failure to educate its children—and points the way to reversing that failure.

Brill not only takes us inside their roller-coaster battles, he also concludes with a surprising prescription for what it will take from both sides to put the American dream back in America’s schools.

Steven Brill is the founder of Journalism Online, a company designed to create a new, viable business model for journalism to flourish online.  He is a feature writer for The New Yorker, The New York Times Magazine, and TIME.  Brill founded the Yale Journalism Initiative, which recruits and trains journalists.  He founded and ran Court TV, The American Lawyer Magazine, and Brill's Content Magazine.  He is the author of After: How America Confronted the September 12th Era and The Teamsters.

“With fresh color and a compelling storyline, Brill has managed to produce the seemingly impossible: an exciting book about education policy. . . . There is a lot to learn from Class Warfare. . . . Brill has a Woodwardian knack for getting people to tell him things they probably shouldn’t.” –Time

“[Brill] brings a sharp legal mind to the world of education reform. . . . [He] conveys the epiphanies, setbacks and triumphs of a national reform movement.” –The New York Times Book Review