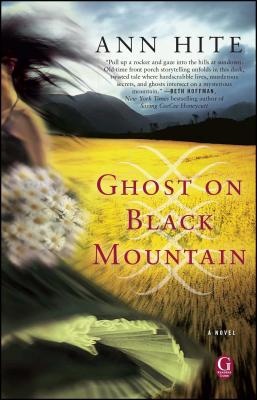 ONCE A PERSON LEAVES THE MOUNTAIN, THEY NEVER COME BACK, NOT REALLY. THEY’RE LOST FOREVER.

Nellie Clay married Hobbs Pritchard without even noticing he was a spell conjured into a man, a walking, talking ghost story. But her mama knew. She saw it in her tea leaves: death. Folks told Nellie to get off the mountain while she could, to go back home before it was too late. Hobbs wasn’t nothing but trouble. He’d even killed a man. No telling what else. That mountain was haunted, and soon enough, Nellie would feel it too. One way or another, Hobbs would get what was coming to him. The ghosts would see to that. . . .

Told in the stunning voices of five women whose lives are inextricably bound when a murder takes place in rural Depression-era North Carolina, Ann Hite’s unforgettable debut spans generations and conjures the best of Southern folk-lore—mystery, spirits, hoodoo, and the incomparable beauty of the Appalachian landscape.

Ann Hite’s debut novel, Ghost on Black Mountain, not only became a Townsend Prize Finalist but won Georgia Author of the Year in 2012. Her personal essays and short stories have been published in numerous national anthologies. The Storycatcher is her second Black Mountain novel. Ann is an admitted book junkie with a library of over a thousand books. She lives in Smyrna, Georgia, with her husband and daughter, where she allows her Appalachian characters to dictate their stories.

"An eerie page-turner told in authentic mountain voices that stick with the reader long after the story ends." –Amy Greene, author of Bloodroot

"The authentic voice of Nellie Pritchard, who comes to Black Mountain as a new bride, wraps around you and pulls you deep into this haunted story. Ann Hite delivers an eerie page-turner that I couldn’t put down." -- Joshilyn Jackson, New York Times bestselling author of Gods in Alabama and Backseat Saints

"The inhabitants of Black Mountain live side-by-side with the spirits of the dead, throw spells and dig for treasure, solve their problems with careful alliances and the occasional murder. This is a story where the spookiness of a mountain village comes to life through gritty characters whose feelings and motivations seem all too similar to our own. Ann Hite captures their voices so well, you'd swear they're whispering into your ear. Ghost on Black Mountain is captivating."—Rebecca Coleman, author of The Kingdom of Childhood

"Will intrigue readers eager for a Southern Gothic tale, and suggests a promising future for the Black Mountain novels to come."—Publisher's Weekly

"Multiple female narrators add dimension and perspective to Hite's first novel, and the sightings and visits from the spirits are often appropriately eerie . . . [An] artfully woven tale." --Library Journal

"[Ann Hite] twists folklore with the genres of Southern Gothic, paranormal and literary fiction like a fine, fat pretzel, a guilty pleasure after midnight . . . A richly layered tale of haints, hoodoo and heebie-jeebies, mayhem and murder, love and betrayal."—Alabama Mobile Register

“Hite paints a loving portrait of rural mountain life in the early twentieth century, and characters are nuanced and true”--Atlanta Magazine