A Theory of Fun for Game Design (Paperback) 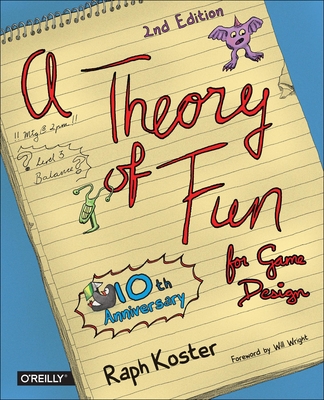 A Theory of Fun for Game Design (Paperback)

Now in full color, the 10th anniversary edition of this classic book takes you deep into the influences that underlie modern video games, and examines the elements they share with traditional games such as checkers. At the heart of his exploration, veteran game designer Raph Koster takes a close look at the concept of fun and why it's the most vital element in any game.

Why do some games become boring quickly, while others remain fun for years? How do games serve as fundamental and powerful learning tools? Whether you're a game developer, dedicated gamer, or curious observer, this illustrated, fully updated edition helps you understand what drives this major cultural force, and inspires you to take it further.

Raph Koster is a veteran game designer who has been professionally credited in almost every area of the game industry. He's been the lead designer and director of massive titles such as Ultima Online and Star Wars Galaxies; and he's contributed writing, art, soundtrack music, and programming to many more titles ranging from Facebook games to single-player titles for handheld consoles. He has worked as a creative executive at Sony Online and Disney Playdom, and in 2012 was honored as an Online Game Legend at the Game Developers Conference Online.