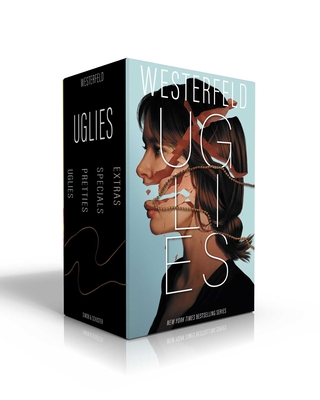 The complete New York Times bestselling Uglies series is available as a collectible boxed set. The future isn’t far away.

In Tally Youngblood’s world, looks matter. She lives in a society created to function with perfect-looking people who never have a chance to think for themselves. And she’s tired of it. First as an ugly, then a pretty, and finally a special, Tally takes down the social infrastructure. And then, a generation later, a world obsessed with fame and instant celebrity—and filled with extras—will reap the consequences.

This collectible boxed set contains the complete Ugles series: Uglies, Pretties, Specials, and Extras.
Scott Westerfeld is the author of the Leviathan series, the first book of which was the winner of the 2010 Locus Award for Best Young Adult Fiction. His other novels include the New York Times bestseller Afterworlds, the worldwide bestselling Uglies series, The Last Days, Peeps, So Yesterday, and the Midnighters trilogy. Visit him at ScottWesterfeld.com or follow him on Twitter at @ScottWesterfeld.