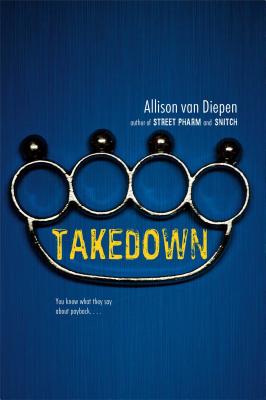 
Available to Order - Usually Arrives in Our Store in 4 to 7 Days
A teen infiltrates a drug ring to settle a vendetta in this fast-paced novel from the author of Street Pharm and Snitch.

Darren took the fall for Diamond Tony, the notorious head of the city’s drug cartel. Two years later, Darren’s finally out of juvie—and determined to get even.

Working as an informant for the police, Darren infiltrates Diamond Tony’s operation. But falling for sweet, innocent Jessica was not part of that plan. She’s a distraction—and a liability. She’s also everything Darren dreamed about while he was locked up, and with her, he has the promise of a fresh start.

When a deadly turf war breaks out between Diamond Tony and the Bloods, Darren gets caught in the crossfire. The cops think he’s playing both sides, and any mistake could be his last. Darren has to stay on his game if he’s going to protect Jessica—and if he’s going to stay alive.
Allison van Diepen is the author of Street Pharm, Snitch, Raven, and Takedown. She teaches at an alternative high school in Ottawa, Canada. Visit her at AllisonvanDiepen.com.
"A smart and believably gritty tale of the streets with genuine heart."
— Kirkus