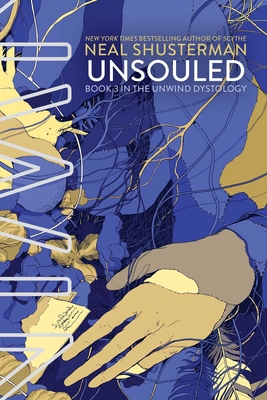 This is book number 3 in the Unwind Dystology series.

Teens fight for their humanity in this thrilling third book in the New York Times bestselling Unwind Dystology series by Neal Shusterman.

Connor and Lev are on the run after the destruction of the Graveyard, the last safe haven for AWOL unwinds. But for the first time, they’re not just running away—they’re running towards answers, in the form of a woman Proactive Citizenry has tried to erase from history itself. If they can find her and learn why the shadowy figures behind unwinding are so afraid of her, they may discover the key to ending the unwinding process forever.

Cam, the rewound boy, is plotting to take down the organization that created him. He knows that if he can bring Proactive Citizenry to its knees, it will show Risa how he truly feels about her. And without Risa, Cam is having trouble remembering what it feels like to be human.

With the Juvenile Authority and vindictive parts pirates hunting them, the group’s paths will converge explosively—and everyone will be changed.
Neal Shusterman is the New York Times bestselling author of more than thirty award-winning books for children, teens, and adults, including the Unwind dystology, the Skinjacker trilogy, Downsiders, and Challenger Deep, which won the National Book Award. Scythe, the first book in his latest series, Arc of a Scythe, is a Michael L. Printz Honor Book. He also writes screenplays for motion pictures and television shows. Neal is the father of four, all of whom are talented writers and artists themselves. Visit Neal at StoryMan.com and Facebook.com/NealShusterman.
"Suspenseful...the overall premise is as hauntingly plausible as ever...electrifying."
— Booklist