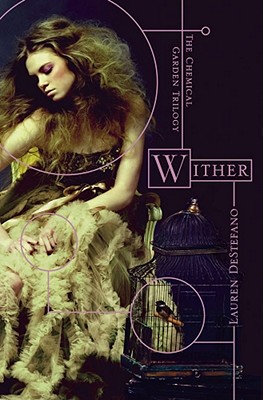 By Lauren DeStefano
Please email or write store for pricing and availability information.
Hard to Find

“This dark, dystopian fantasy is the stunning beginning to what promises to be an exciting trilogy. In a world where women die at age 20 and men at age 25, 16-year-old Rhine is among thousands of girls who are kidnapped and sold to wealthy young husbands. Rhine finds herself one of three mistresses on a huge, decadent estate, but her only wish is to escape back to the poverty in which she lived with her twin brother. I'm already pumped for the next book!”
— Daryl Ellerbe, Greenlight Bookstore, Brooklyn, NY

By age sixteen, Rhine Ellery has four years left to live. She can thank modern science for this genetic time bomb. A botched effort to create a perfect race has left all males with a lifespan of 25 years, and females with a lifespan of 20 years. Geneticists are seeking a miracle antidote to restore the human race, desperate orphans crowd the population, crime and poverty have skyrocketed, and young girls are being kidnapped and sold as polygamous brides to bear more children.

When Rhine is kidnapped and sold as a bride, she vows to do all she can to escape. Her husband, Linden, is hopelessly in love with her, and Rhine can’t bring herself to hate him as much as she’d like to. He opens her to a magical world of wealth and illusion she never thought existed, and it almost makes it possible to ignore the clock ticking away her short life. But Rhine quickly learns that not everything in her new husband’s strange world is what it seems. Her father-in-law, an eccentric doctor bent on finding the antidote, is hoarding corpses in the basement. Her fellow sister wives are to be trusted one day and feared the next, and Rhine is desperate to communicate to her twin brother that she is safe and alive. Will Rhine be able to escape--before her time runs out?

Together with one of Linden's servants, Gabriel, Rhine attempts to escape just before her seventeenth birthday. But in a world that continues to spiral into anarchy, is there any hope for freedom?

Lauren DeStefano is the author of The Internment Chronicles and the New York Times bestselling Chemical Garden trilogy, which includes Wither, Fever, and Sever. She earned her BA in English with a concentration in creative writing from Albertus Magnus College in Connecticut. Visit her at LaurenDeStefano.com.

A “harrowing debut . . . DeStefano has an observant and occasionally pitiless eye, chronicling the cruelties, mercies, and inconsistencies of her young characters. . . . It will be intriguing to see how DeStefano develops [the larger world] as this promising trilogy progresses.”
– *PW STARRED review, January 10, 2010

“Lauren DeStefano crafts an all too believable future. I loved the world, the romance, the writing -- exactly the kind of book I've been craving to read.”
--Carrie Ryan, New York Times bestselling author of THE FOREST OF HANDS AND TEETH

"This beautifully-written debut fantasy, with its intriguing world-building, well-developed characters and intricate plot involving flashbacks as well as edge-of-the-seat suspense, will keep teens riveted to the plight of Rhine and her sister wives. The compelling cover will draw them in and the cliffhanger ending will leave them eagerly awaiting volumes two and three of The Chemical Garden Trilogy. This thought-provoking novel will also stimulate discussion in science and ethics classes."--VOYA

“I really enjoyed Wither, I just couldn't put it down! Rhine is such an amazing main character. She is strong, passionate and determined…. Wither is nothing short of breathtaking. “
—sparkling-reviews.blogspot.com

“Wither is an exceptional novel that begins with a bang and doesn't let you go--it's gut-wrenching, shocking, incredible, and completely and utterly absorbing all at once…. DeStefano is a fearless writer, and though it is firmly its own book, Wither will remind readers of Margaret Atwood’s The Handmaid’s Tale.”
—TheCompulsiveReader.com

[A] thought-provoking debut, reminiscent of The Handmaid’s Tale with a touch of Big Love . . . Rhine’s fight for freedom against the clock—and the dissecting table—will leave readers eager for the sequel. Give this one to fans of The Hunger Games trilogy or Ally Condie’s Matched (2010). - KIRKUS, February 1, 2011

"[Rhine] proves herself to be a heroine who faces her situation with spirit and cleverness. The trapped bride and mysterious husband are straight out of Gothic romances. By stirring in elements of sheer creepiness with dystopia and the hot topic of polygamy, DeStefano creates a story that should have broad appeal."
--School Library Journal

"This absorbing page-turner may remind some readers of Suzanne Collins’ Hunger Games with its fearless heroine, sinister villain, bleak landscape and poignant romance. Wither is less violent but is in many ways even more terrifying as DeStefano proves herself a master of plot, setting, character and psychological suspense." --The Buffalo News