This Changes Everything: Capitalism vs. The Climate (CD-Audio) 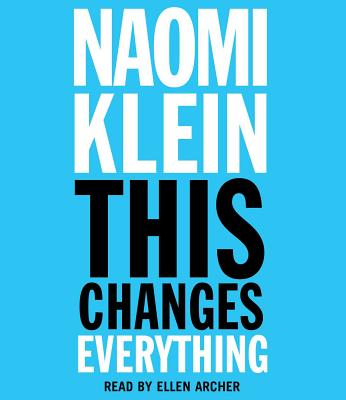 By Naomi Klein, Ellen Archer (Read by)
Email or call for price. Handling fee may apply.
Special Request - May Not Be Available

— Lynn is our used book buyer at TC, one of the many tasks she has performed over the decades

The most important book yet from the author of the international bestseller The Shock Doctrine, a brilliant explanation of why the climate crisis challenges us to abandon the core “free market” ideology of our time, restructure the global economy, and remake our political systems.

Can we pull off these changes in time? Nothing is certain. Nothing except that climate change changes everything. And for a very brief time, the nature of that change is still up to us.

Naomi Klein is an award-winning journalist, columnist, and author of the New York Times and international bestsellers The Shock Doctrine, No Logo, This Changes Everything, and No Is Not Enough. A Senior Correspondent for The Intercept, reporter for Rolling Stone, and contributor for both The Nation and The Guardian, Klein is the inaugural Gloria Steinem Endowed Chair in Media, Culture, and Feminist Studies at Rutgers University. She is cofounder of the climate justice organization The Leap.