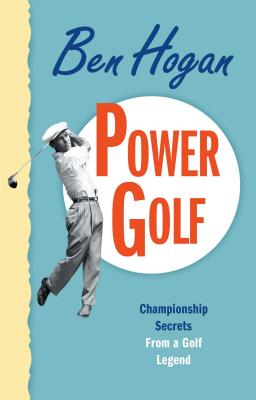 
Available to Order - Usually Arrives in Our Store in 4 to 7 Days
Now available in trade paperback—the best golf instruction book ever written from one of golf’s all time greatest players—featuring more than 120 self-teaching tips and illustrations to show readers how to lower their golf score.

"There is no such individual as a born golfer. Some have more natural ability than others, but they’ve all been made."—Ben Hogan

Considered one of the greatest golfers in the history of the game, Ben Hogan is still noted for the phenomenal power of his swing and his unbeatable ability as a ball striker. He is also known for his dedication to practice and his belief that any golfer can, with training, determination, and a little guidance, improve his or her game significantly. With the help of his classic book, Power Golf, you too can achieve a higher level of play than you ever thought possible.

Profusely illustrated with detailed line drawings, Power Golf walks you through every step of the skills that Ben Hogan painstakingly acquired over his years as a champion player. Here, you will find:· How to master the celebrated Hogan grip that made his swing so powerful

· Why a balanced stance is important, and how to achieve it

· The details of a winning backswing and downswing

· How to achieve greater distance from your wood shots

· Minimizing your number of putts

· How to conquer bunker, uphill, and downhill shots

· Playing in rain and wind

No matter how experienced a golfer you are—whether a beginner or more advanced—Power Golf will help you play through to your best game ever.

WITH OVER 120 SELF-TEACHING ILLUSTRATIONS!
Ben Hogan discovered golf as a fifteen-year-old caddie. He turned pro at seventeen, joined the tour full-time as a nineteen-year-old in 1931, and has won nine pro majors. A four-time PGA Player of the Year, he is one of only four golfers to win all four professional majors. At forty-one, he won five of six tournaments, including the Masters, U.S. Open and the British Open. Hogan died at eighty-four in 1997 in his home in Fort Worth.