Anvil!: The Story of Anvil (Paperback) 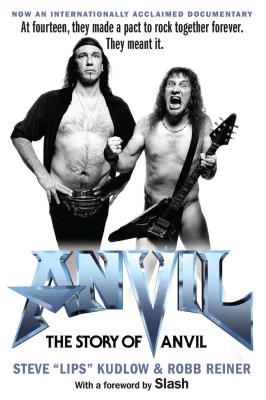 Anvil!: The Story of Anvil (Paperback)


Available to Order - Usually Arrives in Our Store in 4 to 7 Days
In the early seventies, when Led Zeppelin and Black Sabbath ruled the world, Steve “Lips” Kudlow and Robb Reiner, two young Jewish boys from the northern suburbs of Toronto, vowed to rock together forever. A decade later, their band Anvil released one of the heaviest records in music history, Metal on Metal, which influenced a whole musical generation, including the world-dominating bands Metallica, Slayer, and Anthrax. Yet while these bands went on to sell millions of records, Anvil slipped straight into obscurity.

Was it too much sex and drugs and not enough rock ‘n’ roll? Was it the menagerie of pets that accompanied them on tour? Their uncanny knack for setting themselves on fire whenever a record company executive was watching? Now, almost thirty years later, like a real-life Spinal Tap, these unlikely musical heroes are still rocking, and still chasing their dream. Written in their own words, Anvil: The Story of Anvil charts the rise, fall, and eventual triumph of two men whose indestructible friendship, talent, and determination took them on a unique journey in the world of rock. A bittersweet and frequently hilarious hymn to the human spirit, played loud in power chords, it is a story of true brotherly love, living the dream, and never giving up.

Praise for the film documentary Anvil: The Story of Anvil:
Lips Reiner is the author of Anvil!, a Simon & Schuster book.

Lips Reiner is the author of Anvil!, a Simon & Schuster book.