Being and Time (Paperback) 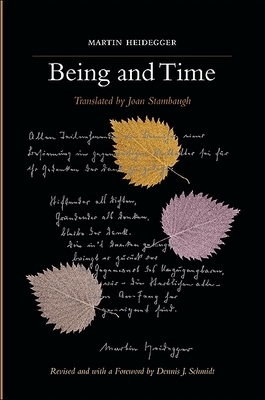 Being and Time (Paperback)


Available to Order - Usually Arrives in Our Store in 4 to 7 Days
The publication in 1927 of Martin Heidegger's magnum opus, Being and Time, signaled an intellectual event of the first order and had an impact in fields far beyond that of philosophy proper. Being and Time has long been recognized as a landmark work of the twentieth century for its original analyses of the character of philosophic inquiry and the relation of the possibility of such inquiry to the human situation. Still provocative and much disputed, Heidegger's text has been taken as the inspiration for a variety of innovative movements in fields ranging from psychoanalysis, literary theory, existentialism, ethics, hermeneutics, and theology. A work that disturbs the traditions of philosophizing that it inherits, Being and Time raises questions about the end of philosophy and the possibilities for thinking liberated from the presumptions of metaphysics.

The Stambaugh translation captures the vitality of the language and thinking animating Heidegger's original text. It is also the most comprehensive edition insofar as it includes the marginal notes made by Heidegger in his own copy of Being and Time, and takes account of the many changes that he made in the final German edition of 1976. The revisions to the original translation correct some ambiguities and problems that have become apparent since the translation appeared fifteen years ago. Bracketed German words have also been liberally inserted both to clarify and highlight words and connections that are difficult to translate, and to link this translation more closely to the German text.