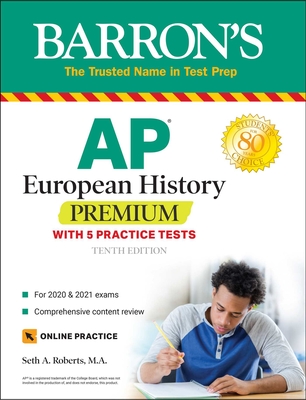 Publisher's Note: Products purchased from third-party sellers are not guaranteed by the publisher for quality, authenticity, or access to any online entitles included with the product.
Seth Roberts has been teaching AP European history since 1999. He has a Bachelor’s degree in Secondary Social Studies Education from West Chester University in 1998 and received his Master’s in Community & Economic Development in 2007. He began his teaching career in Frederick County Public Schools, where he worked as an AP and IB teacher and then as the Secondary Social Studies Teacher Specialist from 1998–2011. He then taught AP European History and AP Economics for the Surabaya International School in Indonesia from 2011–2014. He returned to Frederick County Public Schools from 2014–2016 and then joined the faculty of the International Bilingual School of Hsinchu in Taiwan, where he teaches AP Economics and AP European History, and is the Director of Teaching & Learning. He has received many accolades for his teaching and coaching, including a distinguished teaching award from Stanford University, and has been recognized as the World Scholar’s Cup coach of the year. Mr. Roberts was also the director of Model United Nations Operations for the UNESCO Center for Peace from 2004–2017. Mr. Roberts is married with two daughters and is an avid disc golfer.