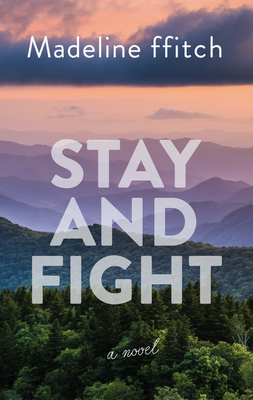 By Madeline Ffitch
$31.99
Available to Order - Usually Arrives in Our Store in 4 to 7 Days

Stay and Fight can only be described as harrowing for the way that it toes the line between a family tearing apart and a family knotting itself so tightly together that individuals no longer quite have edges. I’ve never read a book that made me so acutely aware of how thin that line between the two is. Set in rural Appalachia and rooted in a survivalist mentality, this is the novel of not just queer family-building but queer family-lasting, and it will remind you of every reason under the sun to stay and fight. I loved it madly.

“From the first page of this debut novel set deep in Appalachia, we know that Stay and Fight is aptly named, for the way it explores the constant struggle of its characters to stay where they are while fighting for a better existence. ffitch expertly shows us the romantic, albeit brutally raw, reality of living off the grid (on one’s own terms, most importantly), a feat she somehow accomplishes in the most modestly ambitious way. Stay and Fight is fantastic.”
— Caridad Cole, Community Bookstore, Brooklyn, NY

A wildly original, piercingly timely addition to the story of the American family

Helen arrives in Appalachian Ohio full of love and her boyfriend's ideas for living off the land. Too soon, with winter coming, he calls it quits. Helped by Rudy--her government-questioning, wisdom-spouting, seasonal-affective-disordered boss--and a neighbor couple, Helen makes it to spring. Those neighbors, Karen and Lily, are awaiting the arrival of their first child, a boy, which means their time at the Women's Land Trust must end. So Helen invites the new family to throw in with her--they'll split the work and the food, build a house, and make a life that sustains them, if barely, for years. Then young Perley decides he wants to go to school. And Rudy sets up a fruit-tree nursery on the pipeline easement edging their land. The outside world is brought clamoring into their makeshift family. Set in a region known for its independent spirit, Stay and Fight shakes up what it means to be a family, to live well, to make peace with nature and make deals with the system. It is a protest novel that challenges our notions of effective action. It is a family novel that refuses to limit the term. And it is a marvel of storytelling that both breaks with tradition and celebrates it. Best of all, it is full of flawed, cantankerous, flesh-and-blood characters who remind us that conflict isn't the end of love, but the real beginning. Absorbingly spun, perfectly voiced, and disruptively political, Madeline ffitch's Stay and Fight forces us to reimagine an Appalachia--and an America--we think we know. And it takes us, laughing and fighting, into a new understanding of what it means to love and to be free.

Madeline ffitch cofounded the punk theater company Missoula Oblongata and is part of the direct-action collective Appalachia Resist! Her writing has appeared in Tin House, Guernica, Granta, VICE, and Electric Literature, among other publications. She is the author of the story collection Valparaiso, Round the Horn.